A Swan is Born

Just like giving birth to triplets, a painting is not born all at once …

Last week I was a bit sassy talking about all the things that can get out of control when starting a painting, so it is only fair to show the meandering path one recent painting took and all of the permutations it has gone thorough.

This painting is currently being exhibited at the Butler Museum of American Art in Youngstown, Ohio. (I have to toot my own horn a bit) It is a true honor to have this piece selected from the International Pastel Society of America show in New York by Director, Louis Zona.

But this little painting has had it’s ups and downs. So I thought I would go back to the beginning. Sharing thoughts, revisions, photo sessions with my daughter and large changes that were made along the way.

Here is the initial thumbnail that “clicked” in my head and made me realize there was a tangible story here. I liked the idea of some kind of turban (I am a big fan of the artist John Grey) and a daughter to torture… I wanted a “swan” symbol of some kind to run through the image. 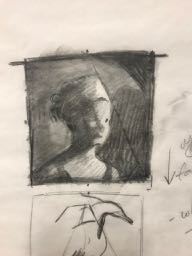 Then came a photo session where I blocked out the light in my studio space with a large sheet. 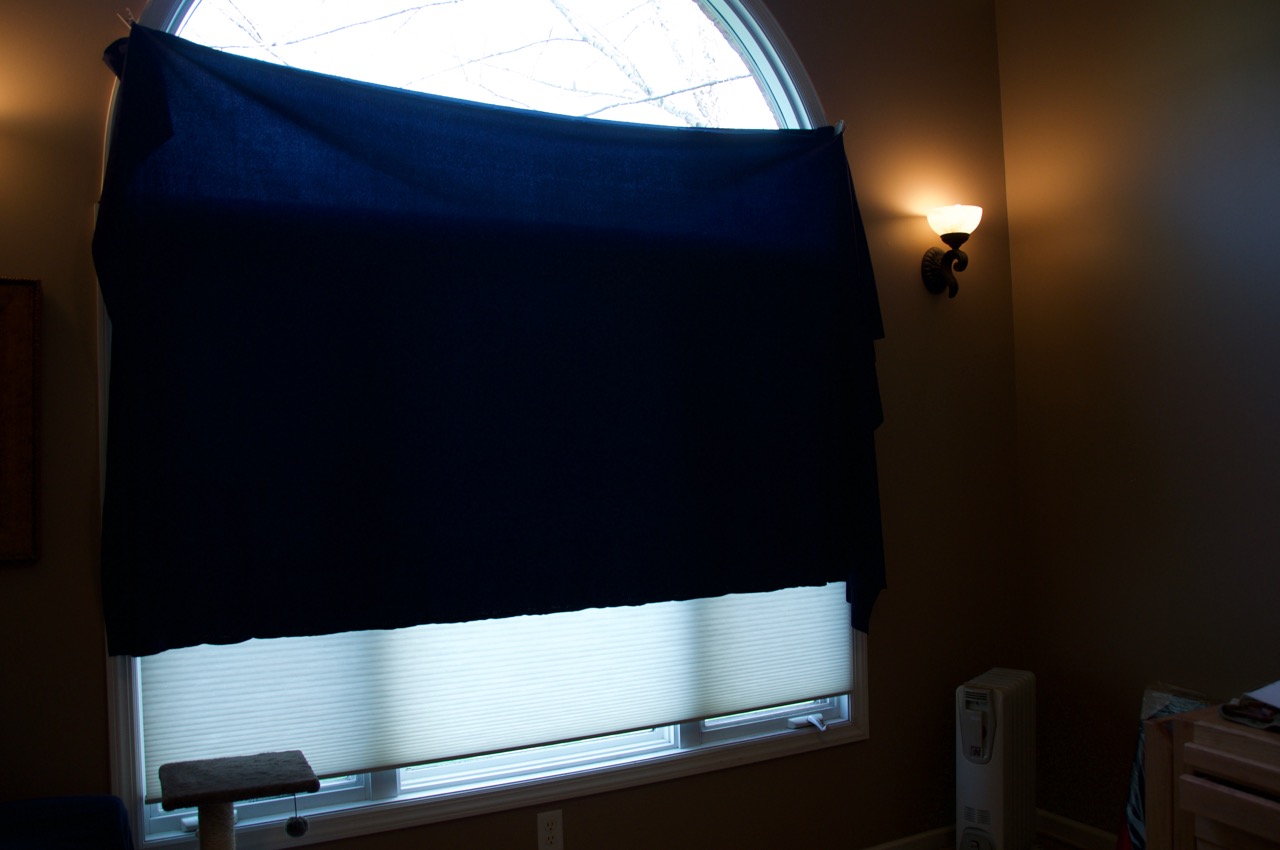 So in the initial idea, I was thinking of the turban as being very funky, and bright-colored – like hot pink? or leopard-skin. Something contemporary and contrasting, hopefully with a serene expression. 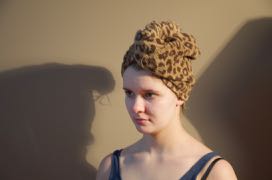 Then I thought it might be a good idea to make the turban itself have a print of feathers on  it. So I spent some time scouring the internet for feather-printed hats or scarves.

Initially, I wanted the shape of a swan to literally run through her and into a shadow behind her, linking her and the area around her.

The initial start to the painting wound up about like this … 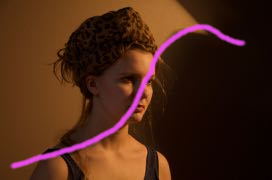 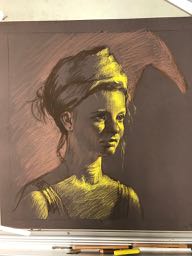 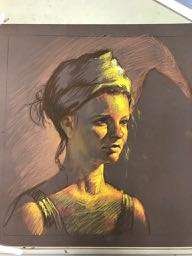 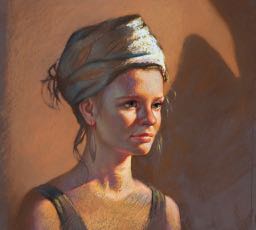 But something felt incomplete. I even checked in it reverse…. 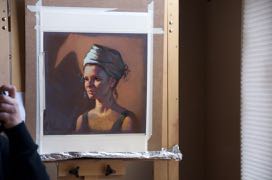 It looked about like this for awhile, but family members kept saying it was slightly “off” so after many weeks of finding myself scowling at the painting, I knew something needed to go. Not being happy with the background proves that sometimes a painting is stubborn and doesn’t’ want to grow up.

So then I tried really “swooshing” it…. 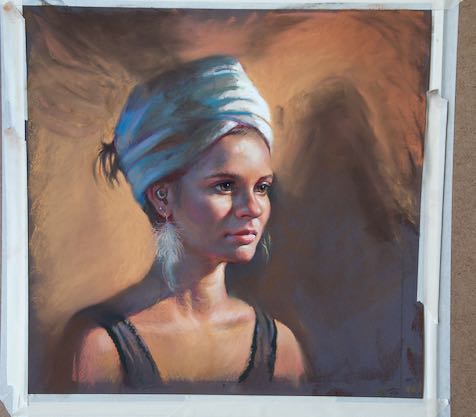 I messed with it some more and it wound up about like below… sort of a “soft swan” shape in the back… I was still not happy and of course I knew her face needed so much more work, but I needed to get this “background thing” figured out first… I even put it in black and white and upside down to see if it would help with my thinking… 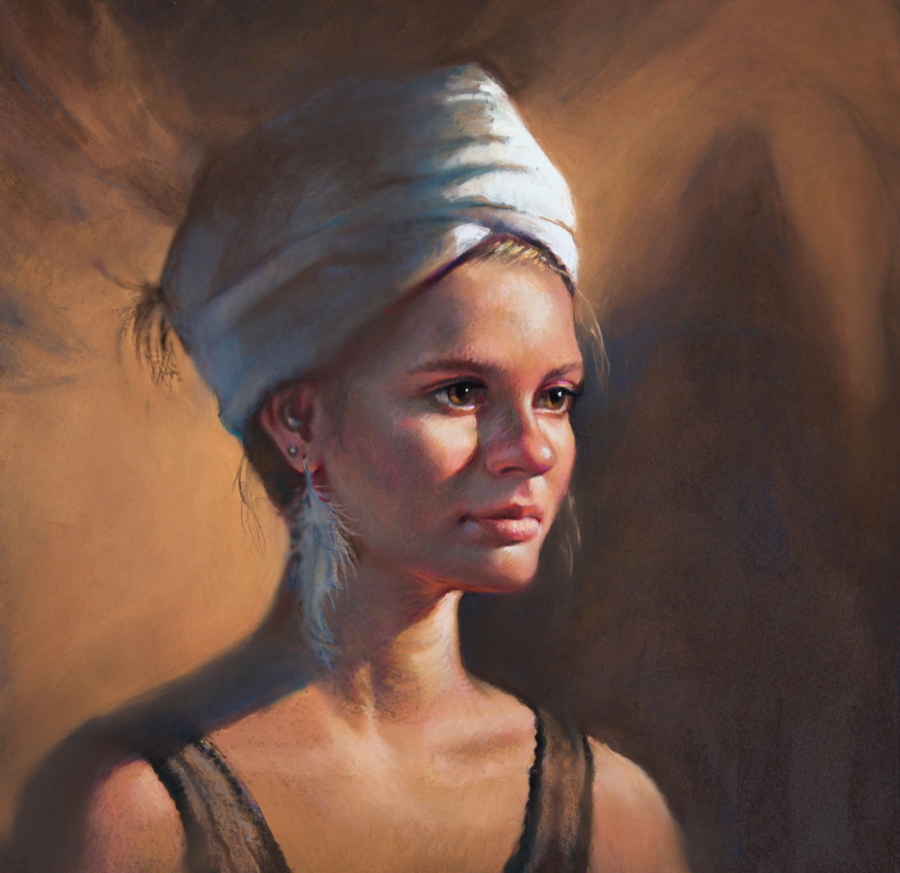 Then I realized I needed a literal swan in the background, but soft – maybe barely there? I thought about beautiful frescos I had seen in Italy years ago and thought maybe that could work. Something old, peeling and faint. I found a few things that had the right feel like this…. 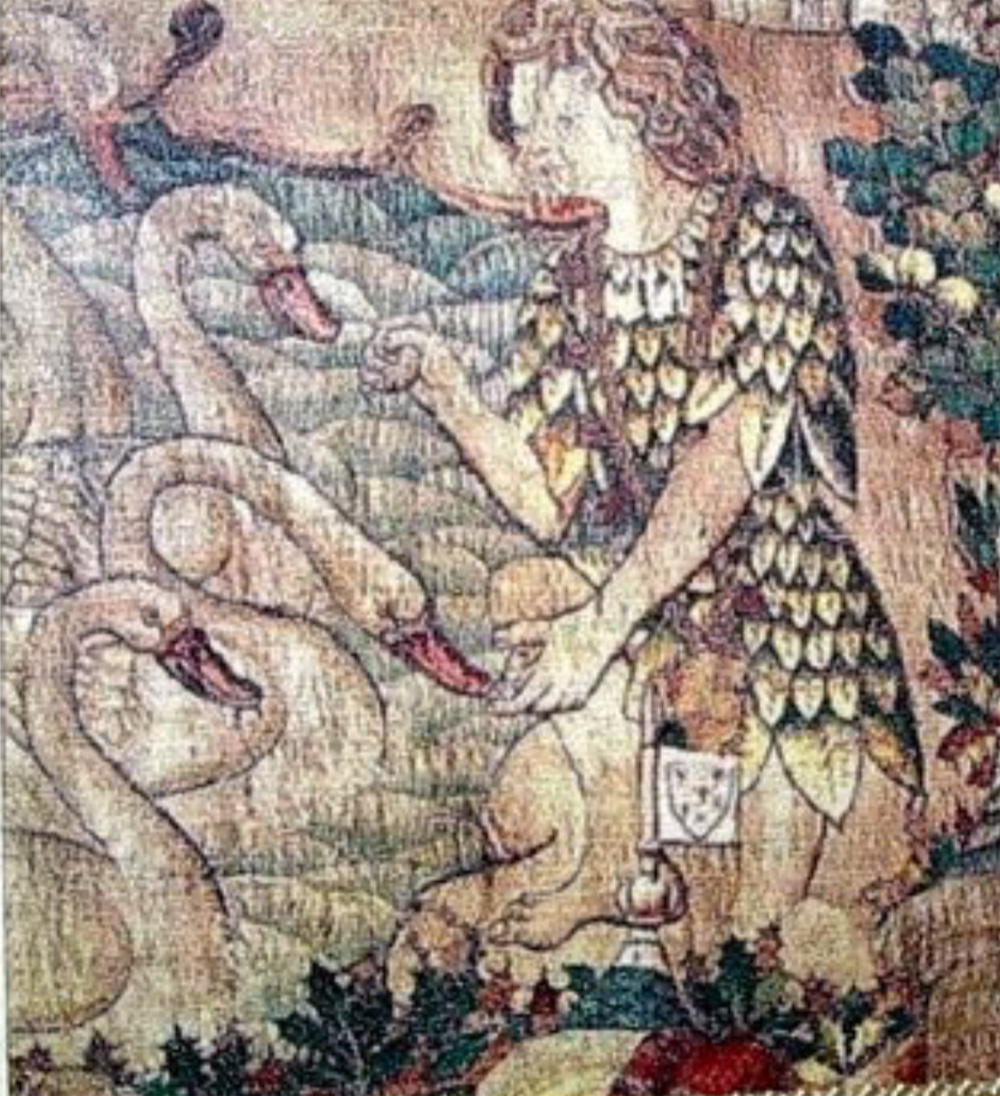 But then I came across a few photos of mosaics – and bam! It hit me – a mosaic in the background would literally display what I was trying to say – how she was made up of pieces – like a mosaic. All elements fitting together to create the whole. I searched and searched until I found this image of a swan that was found on the floor of a church in Italy during a restoration. 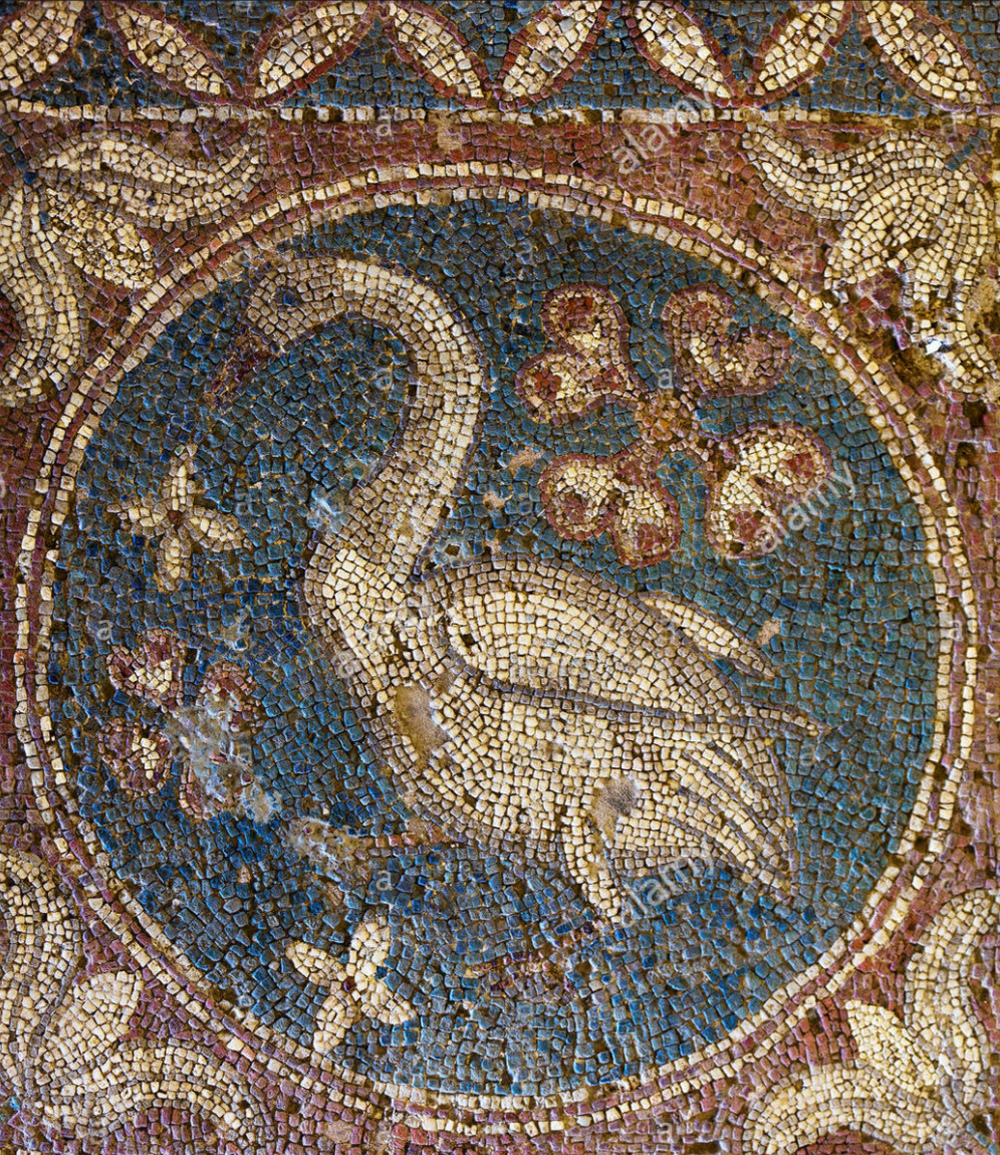 A-Ha!!! That could work! But it was too defined, too brightly colored and was facing the wrong way.  I put it into a graphic converter program and dulled it out… now we are talking! 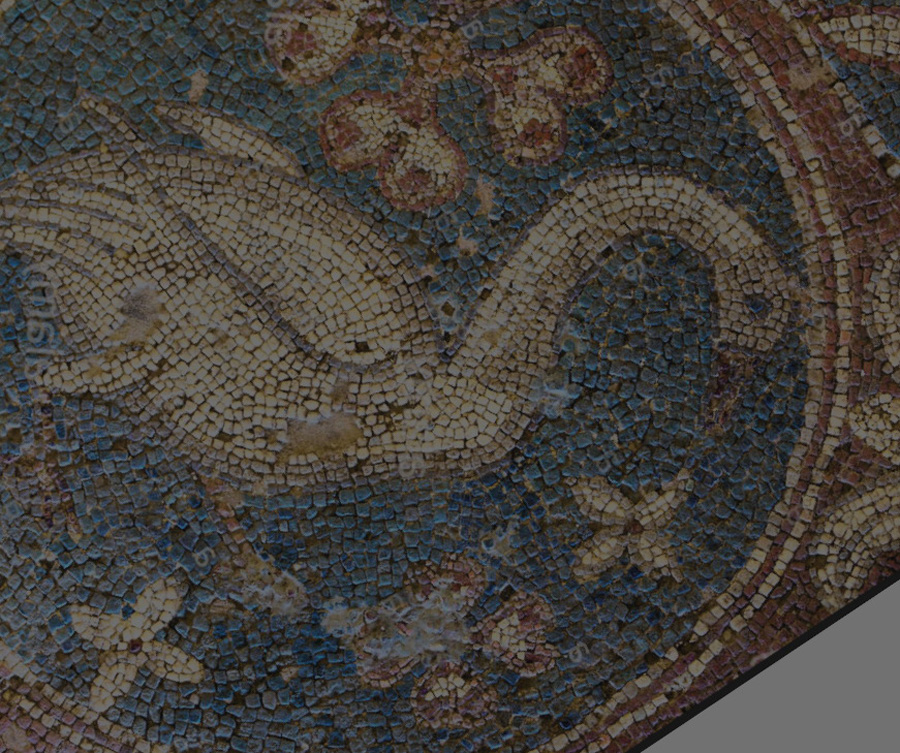 How to fit the mosaic behind her was another struggle. Composition is King, so careful planning was needed. I wanted a clear swan in the image, but pushed back enough to still being able to flow through the piece but not compete with HER….

With a few quick sprays of fixative, (outside, so I don’t die from poison exposure)  I sealed the background and then marked the tiles right overtop of the swoosh from before. If you look closely, you can still see it there. I made sure to use “glider” pastels (yes, bring on the questions) to mark the mosaic pieces. This made sure that the new marks carefully and cleanly marked overtop of the previous layers without the 2 layers melding into each other and causing a smeary mess. As for the stone pieces themselves, the key was to not paint each piece, but to paint around some pieces. Lost edges, hard edges and a ton of stepping back and loosely marking them in. Otherwise, it could have gotten stiff and boring. The background also needed to lower in chroma and in the power of the sticks I was using (again, bring on the questions) so that the mosaic, although detailed, would not take over the image and compete with her visually.

I decided I liked this a lot more.  Another few sessions of torturing my daughter by making her sit with a turban on her head, and I finally got to call it finished.

And for some reason, I liked how this placement made the swan’s foot almost rest on her shoulder. Like she is now supporting all the ancestors that came before her with this name… the weight is on her and the future now… 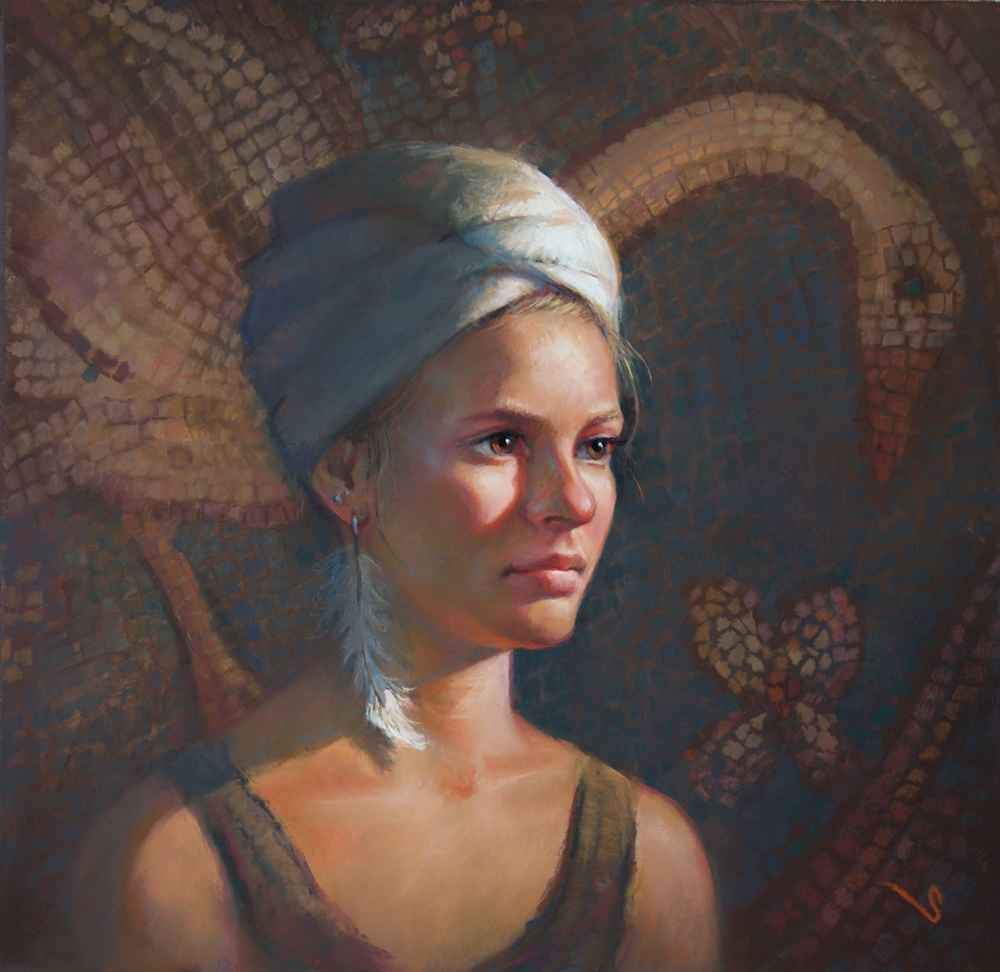 So even with lots of planning, a painting can be difficult to tackle into submission and get it to say, feel, and present to the world what you, the artist, want it to be…

Even now, while this piece is sitting at the prestigious Butler Museum of Fine Art, I ask myself, “Are others seeing flaws I don’t see? Could I have been more energetic with my strokes? More refined? More meaningful? More….????” This business of being an artist is full of self-doubt and correction. But the only thing we can do is to start down the path and follow it as best you can.

Know I am on the path beside you…