I was trying  to put together a “cool” artsy blog for this week and I was having trouble. Too many things on my mind…

The forefront of which was the latest high school shooting here in the States.  I remember being in high school and I think even the idea of being scared or losing my life at my high school would have been impossible to comprehend.  It would never have even crossed my mind.

I do know that when I was in art class I was happy.  Even if I didn’t learn anything that day, it was a refuge. Other kids knew I was good at drawing and it was my “thing”.  Art made me realize that no matter how “uncool” I was or what was going on in the microcosm of high school, that I had that –  art – and the simple joy it brought to me.  Other kids had band, or football or writing, or cheerleading.  Something that they liked and made them feel accomplished.  I don’t have any answers to these shootings, but I think kids these days need that – just simple joys.  A sense of being good at something and appreciated for it.

We had to move our son to a private school this year due to severe bullying over the past few years in elementary school. Yep.  Elementary school. He grew to hate school and had headaches all the time. He would get off the bus crying so I started driving him, but it didn’t fix the problem.  He was ten when we decided to move him out of the school.  I clearly remember sitting in a parent/teacher meeting just a year ago with the principal, advisors and the school psychologist saying… “He is so angry all the time! I don’t want him to be the kid shooting up the school when he gets older!”

My son’s thing is creating things.  No surprise there as the son of an artist and an engineer,  but it was not appreciated at his past school.  He is not devoted to sports, is physically on the small side, and was called a “nerd” and “gay”.  How sad that that phrase is still used as a weapon.

So last week at his new school while in art class my son made a gadget with cardboard which actually took quarters and dispensed candy.  He has been making wondrous gizmos like this for the past few years (like this miniature windmill golf course made with cardboard, popsicle sticks and toothpicks. And no –  he had no help from anyone.) 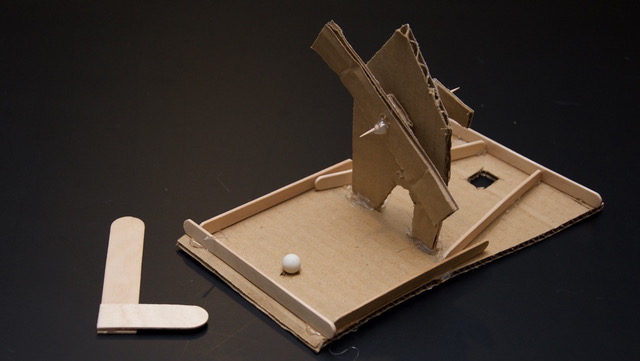 The art teacher noticed and was amazed. My son’s new friends told the teacher that he had a bunch of creations at home and they bragged to the teacher at how during a playdate that they had seen them and that they were amazing.  He has made a donut dispenser that only takes quarters and will reject any other coin,  a hockey table, (above) a candy dispenser out of legos, a skee ball machine….

and is almost finished with a cardboard pinball machine. He just brought me this one afternoon….

So the teacher asked him to bring in one of his creations from home.  Just that,  a simple, “May we see it?”  He brought in a game the next day that gives out gumballs when you get a marble in a hole –  kind of like a miniature golf course.  The teacher then asked Braeden to share what he made with others and then later invited him to come down and teach how he made it to second graders during their class.  It may sound simple, but what she did was an amazing act of kindness and promotion of self-esteem.  She recognized his strength and then put him in a place of importance to teach others.  My son came home saying “this was the best day ever!”  He told me all about it and I could feel the pride coming off him in waves.

He has friends now that want to create things.  He is in a robotics class after school.  He is so happy.

So yes, switching schools has made a difference to him and our family,  but most important is that he feels good about himself again.  These kids need to feel important.  They need to be appreciated for who they are and the many ways that they are creative and unique.  Maybe then the anger would go away.

My heart goes out to the families who have lost their children so suddenly and also to those who have kids that are suffering.