Sometimes you just know the death of a painting is imminent. You try and try to pretend that he is a main character in your work, that he has a phaser for a reason, but no… he is the extra that was meant to die so that the others can learn from his death…..

I have experienced a lot of deaths in my art career. Paintings I was SO excited about and yet they just couldn’t stay alive. Mostly it was my fault. I beat them to death. They had no chance! They may have started off strong- full of promise, and yet I wore them down. Then so much guilt! And anger, right? I spent all that time on them….sigh….

So I wanted to share a painting that has been staring at me for over 4 years. I should just plan on the funeral. I guess I feel like if I hang onto it long enough, something magical will happen and little shoemakers will come forth in the night and make the repairs. Nope.

So why do paintings fail? I touched on one thing- overpainting. In pastel, this can be especially tricky, because the surfaces we work on can only take so much abuse. Even when I work on a very “high-tooth” surface (imagine a soft sandpaper) it can only absorb so much.

Below is an example of a painting where I love the concept, but the actual techinique of it failed me. In my defense, this was the first time I was using Ampersand Pastelbord. (yes, they spell it like that). Nowadays I love the surface, but this was my “learning curve” piece….

So anyone that is familiar with my work knows that typically the idea comes first for me. Then beating myself up over the creation and torturing models comes next. So the original concept here was that I believe the hardest thing a parent can do is to teach their children that they are responsible for their own actions. They are in control of what they say and do. And so they have the power to change things. I thought this was like being a puppeteer of one’s own life. Immediately I decided to torture one of my kids.

This painting was started over 4 years ago. Photos. sketches, redesigns….my daughter sitting still for short periods so I could get it “right”. It went from being more colorful to being more realistic. It went from “looser” to “tighter” and then loosened up again and then back to tighter again. It had an elegant hand which became clubby. It went from lighter to darker and then, yup, lighter and darker again. I wanted moody, I wanted puppet-like. I wanted realistic. I wanted intense. I wanted soft….. blah, blah blah……

The best-laid plans of mice and artists…… 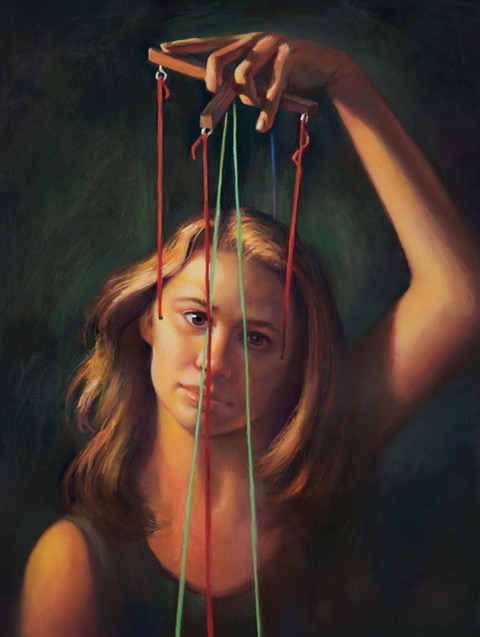 The strings were put in and taken out and put in again. The painting sat alone and ignored while flatlining for many months while I searched for inspiration. (or just hoped it would fix itself). Eventually it was on life support until I decided to pull the plug.

One night I was reading a book by Richard McKinley. In it, he mentioned how pastel could be “steamed” to set the pastel and then this would allow the painting to be reworked again. A-ha! I have a diffuser, so I took the painting and held it over the steam. What a wonderful idea! And it did work! I was able to put down more strokes…… to mess it up again! Whoo hoo! Thanks Richard. I will keep it in mind for the next time.

I have taken paintings and ran them under water to get off the pastel to try again. I have scrubbed an area and then re-gessoed it to make a clean slate. But sometimes the “life” of it is gone and it is time to grieve and move on.

So I have posted this not to get sympathty, so please don’t email me and say this work is great. Nope, not hearing it. I posted it to let you know it is all a struggle and we all fail sometimes. If I read a story from an artist and they say it all comes together so effortlessly, I know they have a long nose.