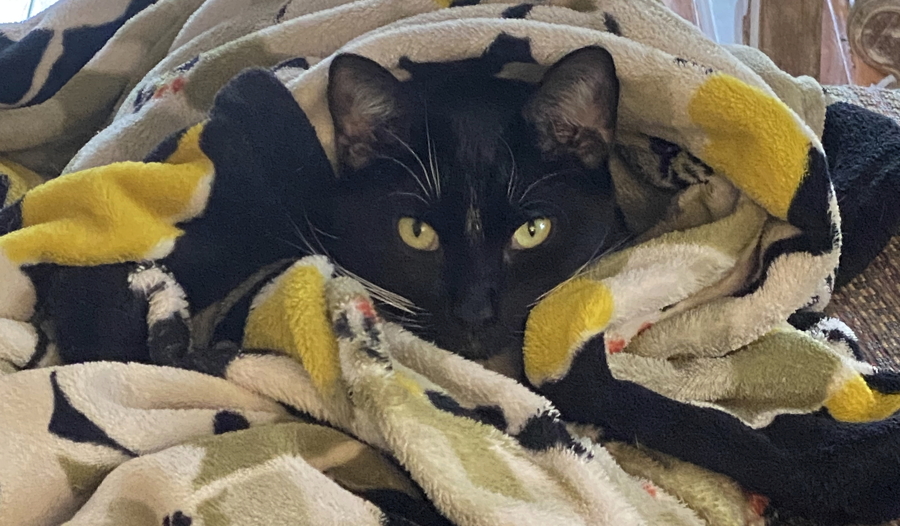 I have a companion in my studio…

I grew up with dogs, but when my kids were little, my yard was being taken over by moles, voles and chipmunks. The decision was made to get a cat to scare off all of the critters. At the Human Society they asked me what I was looking for in a cat. I said I wanted “a huge, killer, monster cat… that was good with children.”

Well, that is exactly what I got. His name was Gumby. (My daughter had to name him Gumball) and he was the sweetest black-and-white tuxedo cat you could ever meet. And he was big. Over 24 pounds. And he did a fairly good job of keeping the critters away. Although at one point we found him snuggled up – not kidding- with a chipmunk next to him on the porch one day. For a short time, his name was Traitor.

The best thing about Gumby though was that he was my constant companion in my studio. If I left to go wash my hands, he would follow me and then follow me back to the easel to continue painting. He was the best non-human friend I ever had, and I mourned his loss a few years ago. You may remember a blog post I wrote about him and the new cat we had rescued at that time.

But two years ago, as I was driving by the local Animal Friends – a non-kill shelter- with my daughter, and she casually remarked that we needed a new cat. I said absolutely not. But then she said “But kittens bring joy and happiness.”

Well, we can always use a dose of that right?

We went in to look, yeah right…

And of course, there was a tiny, black-and-white tuxedo kitten that looked just like Gumby. You know the rest. And since I figured my life was already in chaos at that time, adding a little Havoc could not hurt, right? So his name is Havoc. 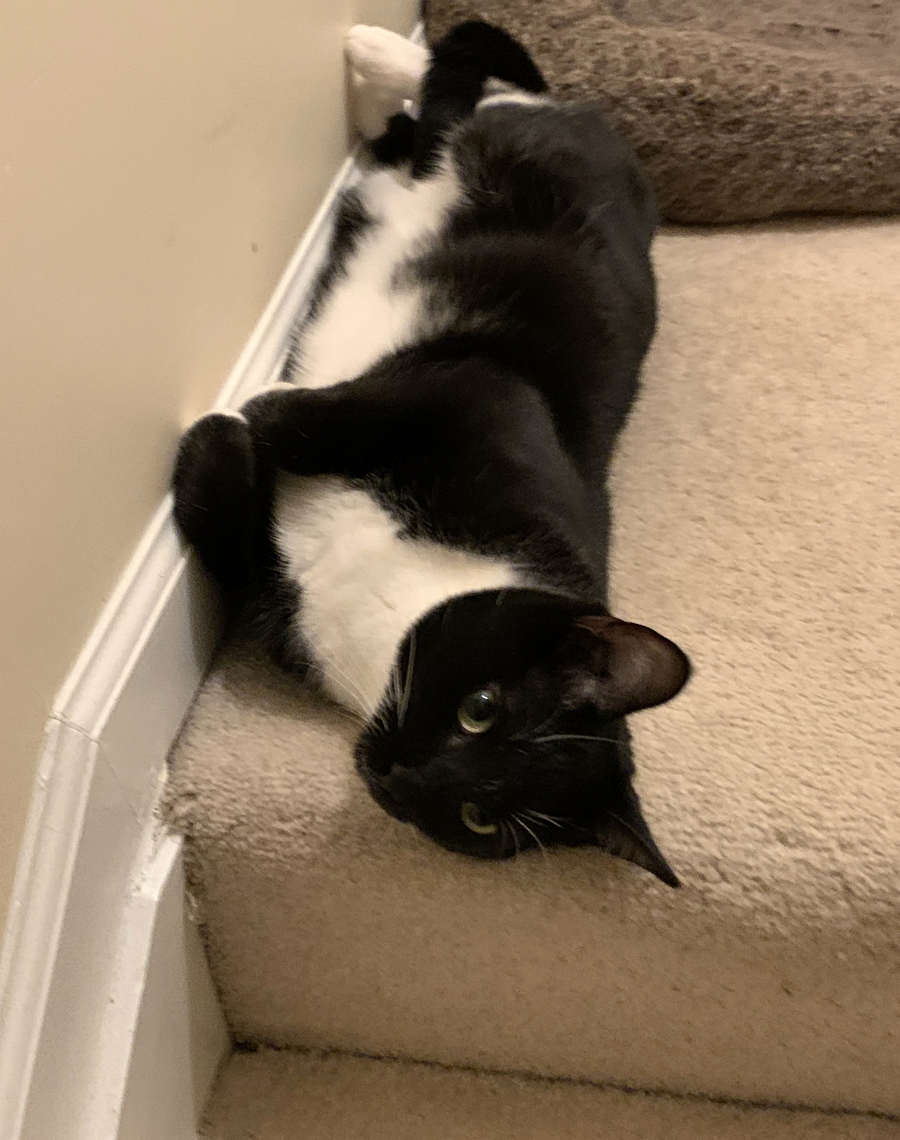 But this cat has been unlike any cat I have ever encountered.

He likes water. Well, loves it actually. He likes to splash in the water bowl – he literally flips it over and prances around in the water puddle throwing water up the walls. I had to get a heavy, ceramic dog bowl to stop him from flipping it over. Now he just plays in the bowl.

Unfortunately, he likes water so much that he will knock over any water glass we leave sitting around. This is how my computer got destroyed. I came home one day to find my computer sitting in a puddle. Dead. Yup, Havoc was in my life.

He knows how to open doors. I often get woken up in the mornings by him jumping up and turning the knob on my bedroom door until it opens, and then he comes strolling in to let me know it is breakfast time.

He loves chewing up boxes. Amazon has kept him in good supply. 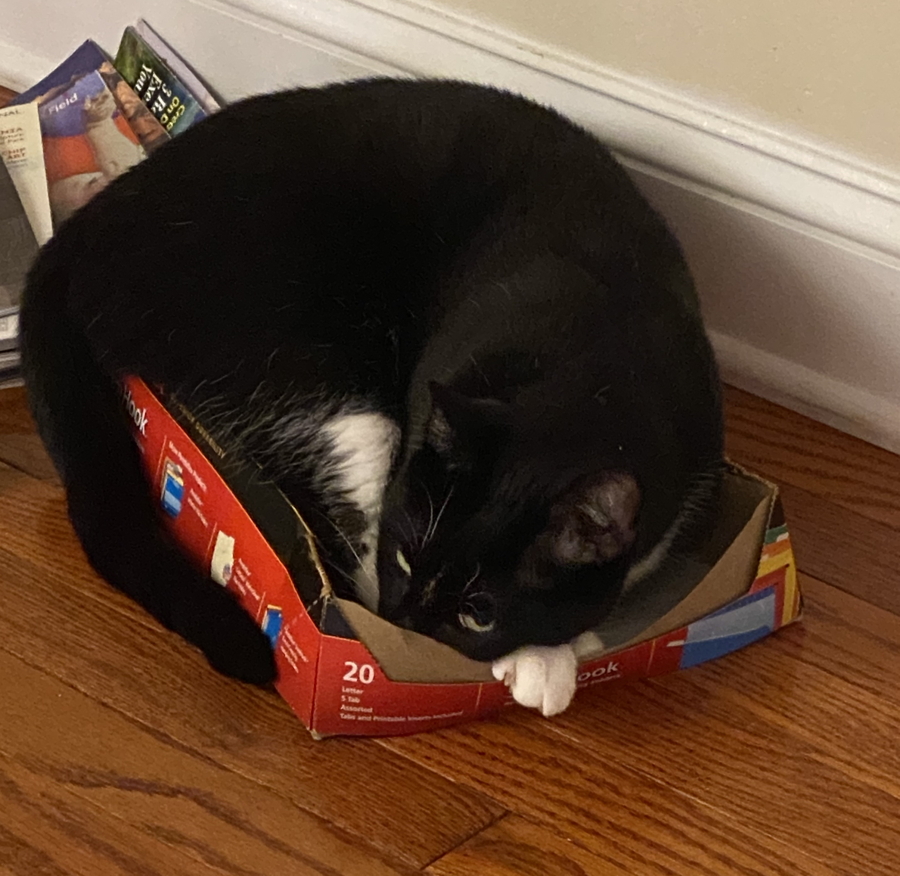 One night we made a stir fry in a wok. A little bit later after we had eaten- and the wok was cool- we found him curled up in the pan. He was covered in oil and soy sauce. So, my daughter suggested we give him a bath. He LOVED it. Purred through the entire process and he let her scrub his head with soap and water. He also purrs through getting his nails cut. He also likes a harness and going for a walk. And he will watch over anyone that is sick in the house. Just like Gumby did.

But the best thing about Havoc is that I have a studio cat again. He keeps me company constantly at my easel. As soon as I go down to my studio he follows. He has even crashed a zoom workshop. He has listened to me while I swear at paintings, dance around at a victory, slam around paint to loud music or while I sit quietly and contemplate what to do next to an image. I am sure he thinks I am a bit unusual too. Most people I have met that have had a black-and-white Tuxedo have called them the smartest cat. I think that may be true. I have found them to be an artists’ best companion.

So be careful what you name your fuzzy friends. Naming him “Havoc” may have been inviting a bit more chaos into the house, but sometimes life does need a bit more joy and happiness.