This is the blog that has taken me 2 and a half years to write. 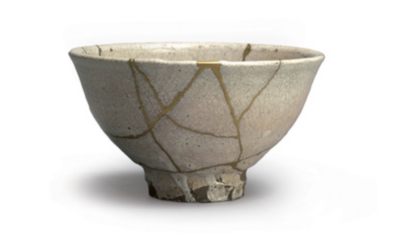 “Out of suffering have emerged the strongest of souls, the most massive of characters are seamed with scars” – E.H Chapin 1814-1880.

Kintsugi. If you are not familiar with this word, I wasn’t either until l came across a book about it at the beginning of 2020.

And it changed me.

Dating back from the 14th century in Japan, kintsugi is the art of placing value in something that has been broken. It is believed to have been started when the Emperor broke his favorite teacup which he then gave it to his artisans to repair. They carefully fixed it and used gold powder to fill in where it had been broken. You may recall seeing vases or teacups online that have been broken and then put back together with gold in the cracks. That is a kintsugi repair. The bowl in the photo above is one that is still around from the 17th century and is made of ceramic. This Japanese philosophy is the belief that the vessel is now stronger and more valuable for having been broken in the first place. Imperfections are cherished and admired. Kintsugi literally means “golden repair.”

The cool thing is that the Japanese believe this in regards to people as well. Someone who has healed from a trauma is now more valuable and more beautiful too.

Because I know one thing for certain- things break.  And so do people.

This practice resonated with me on a personal level. Like most people I have endured life-shattering events that have left me feeling broken in more ways than one. So my art had to change too. This new series of paintings is in the oil medium. As a portrait painter for most of my life, my work has always been about bridging the gap between what is seen on the canvas and the souls and stories behind the images. So this new body of work I have called, “Broken Vessels.” Each painting is a portrait that represents an element that can break in a human being. Positive elements we all share that can be stripped away or lost or shattered. And then we have to heal. Each panel represents a positive trait that becomes broken and then we have to find our way back to being whole….faith, hope, trust, peace, security, innocence, beauty and even our identity among other elements. I have painted 12. Each are life-size portraits and the panels are each 36″h x 24″w. And in recognizing the shared cycle of pain and healing that we all endure on a universal level, each panel has the fibonacci spiral running through every portrait as a foundation for the compositions.

In January of 2020 I had just read a book on kintsugi. So when I found myself with all three of my children back at home at the beginning of the world shutting down in March of 2020, I rejoiced to have them all home and then I began to do what any portrait painter does- to paint them. And there began the stories.

So… oils. I felt I needed a change from my beloved pastels.  And beyond that there was also a need to paint in a different medium for another reason- I knew I had to create these portraits and then I had to “break” them. Literally. Like a broken vase. I needed to cut right through their bodies. Right through their faces. I had to find a way to take the image I was painting and then, when completed, cut them up into pieces to be put back together and “kintsugi repaired.” Each panel in this series has been painted on wooden supports and then each has been cut up with a very loud saber saw, the pieces put back together, glued, and then the cracks filled in carefully with gold leaf. (oh yeah)

And they have not been cut up in any which ‘ol way. No, I spent a lot of time thinking about how each should be cut in a way that represents how those elements break in a person. Love starts to chip away at the edges. Spirituality cuts though the heart. Peace can be shattered. I believe scars are the golden jewelry that we wear- so each portrait has golden kintsugi repair lines running across them.

Sliding on my safety goggles and then physically cutting into my own creations with a very loud saw while standing on a pillow of deep wood chips and “breaking” them after many months of work was both liberating and triumphant. Because these paintings are now also more valuable and the images are much stronger for this act of destruction.

We are broken vessels too. Akin to my own tragedies, putting the pieces back together like a puzzle mirrored my own experiences and filling in the cracks with gold leaf correlated to the abundance that has filled the cracks back up in my own life with friends, love, abundance and peace.

Here is the first panel from the series. There are 12 paintings in total. I started with the “Spirituality” panel. My younger daughter is the model. 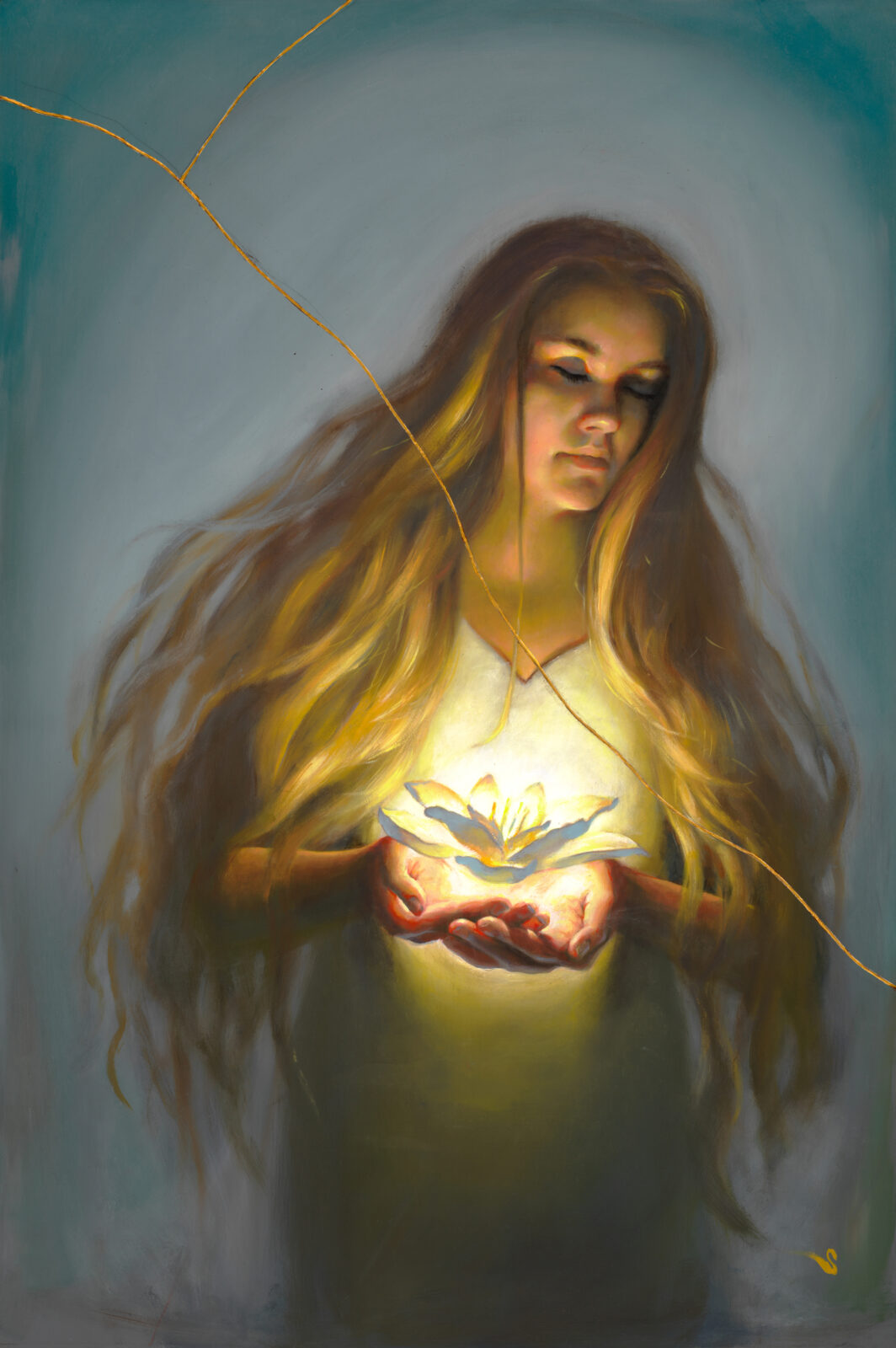 Like most I have had a winding journey when it comes to spirituality. Attending a strict, Byzantine Catholic Church (no music allowed) as a young child and then on to Roman Catholic schools. I attended many other denominations of religion along the way until now I identify mostly with Buddhism. To me, spiritualism is right at the heart of all that we are. The lotus floats just above her hands since our connection to our spirit is just beyond the tangible.

At first the oil medium was a bit of a learning curve. I had not painted in oils for along time and I had to get used to this “brush thing” again. Here are images from early-on in the painting process. 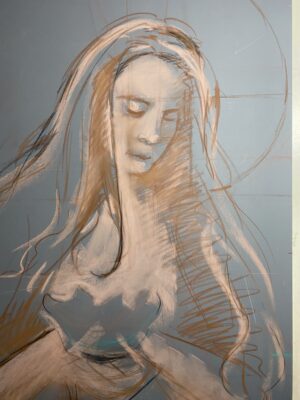 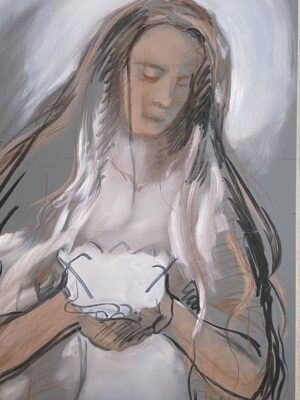 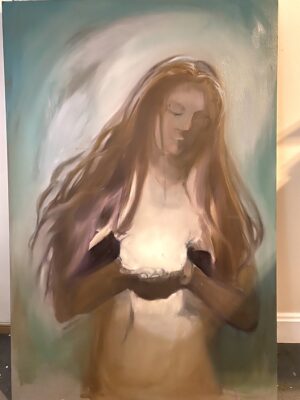 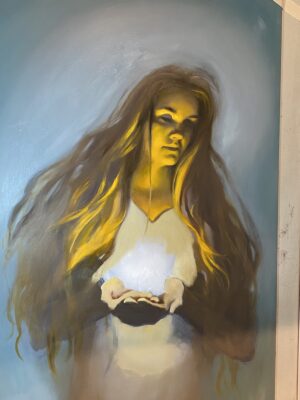 It wasn’t until I went back to my roots in pastel and the screaming yellow, “find the light stage” that I felt in control again. I have used this underlayer in all of my pastels for the past 25 years and so each oil panel now has a cadmium canary-yellow underpainting.

And here is how I was studying the light.  She held a lamp with a light bulb.  You know me-  gotta study the light…. (and yes, her hair really was that long at that time…) 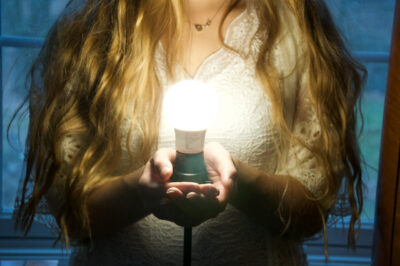 I knew I had to glaze and glaze and glaze to get the sense of “glow” that I wanted coming from the lotus. And I struggled for a bit.  Even wiped out the hands at one point and started over.  It still doesn’t show well enough here in the photos, but hopefully you will get to see the original. (The Exhibition opens on October 8th at the Christine Frechard Gallery in Lawrenceville in Pittsburgh, PA.)  The panel really does seem to glow out from the lotus floating above her hands. Spirituality is just beyond the tangible, so the lotus floats above her cupped hands. This is my daughter who has the heart issues. We find it ironic now that this painting was cut through her heart.

And then I had to learn how to fill in the cracks. Lots of experimentation there. I finally got a series of needle-tipped squeezee bottles from amazon in different sizes to help with that. The “channel” of the cracks had to be filled in enough with gold acrylic paint so that the final coat of gold leaf would sit on top. I averaged about 3 applications of heavy-body acrylic paint squeezed into the cracks with needle-tipped bottles in order for it to build up enough to level off evenly with the top of the panel. (my hands ached for days, months….) Each layer taking a day to dry completely then I added more again. (no, I was not idle during covid…) then tiny brushes for the gold leaf paint overtop of that.

The first few panels were cut simply like this “Spirituality” panel, but I knew as I went along that the panels would get more shattered.  The biggest problem I had at first was what 12 elements to represent. There are so many ways a human being can “break”! I could have done another dozen images and I will as time goes along. This series is only in the beginning stages for me…

Here is a photo of the painting before I put it back together.  (Nails on a chalkboard to some, I know.)  It seems painful, but once I put them back together and those golden lines became such a huge part of the images- it was thrilling I tell ya!

The plastic bags on the floor are full of other pieces of other paintings. (Are ya cringing yet?) I had to be careful not to lose a single tiny piece!  (And yes, that is my sons’ skateboard in the back…) 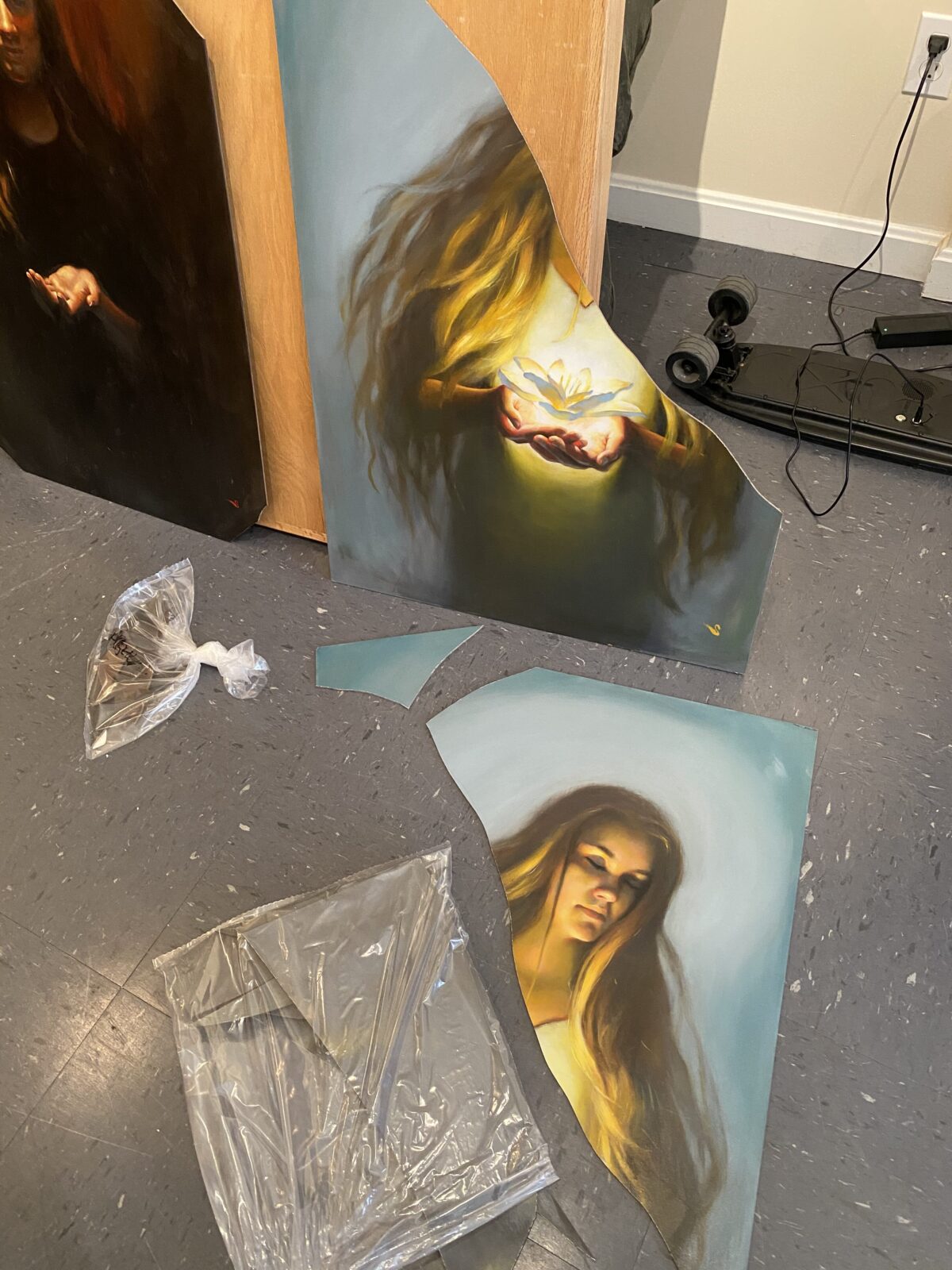 This panel was cut into only 3 pieces.  Here they are coming back togetter… 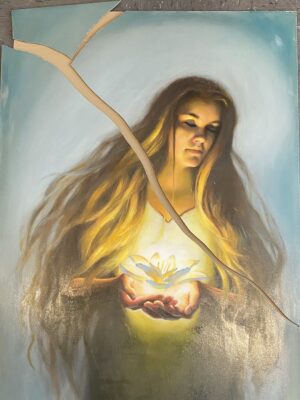 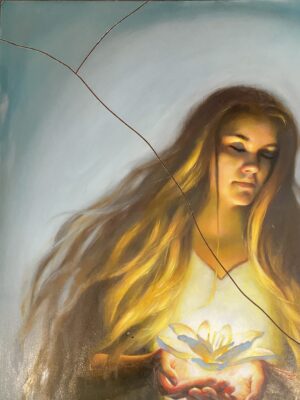 The pieces were glued onto another board and then the filling in of the cracks began. A very laborious process.  More on that later but here is a video…

video of glueing back together

So over the next 6 weeks leading up to the gallery opening I would like to introduce you to the first 6 paintings from my exhibition. “Broken Vessels” opens October 8th at the Christine Frechard Gallery in Lawrenceville in Pittsburgh PA. 5-8 pm. I’ll also include my thoughts along the way and the stories behind each of the models.

Opposite of “spirituality” is our physical bodies, so next week is the “Physical” panel.

Oh! And I know I will get a lot of comments about “how could I possibly cut up my work?”….but trust me, compared to issues in real life, it was a piece of cake.