Loss and a Kitten

Last week I taught my portrait workshop on pastels. We had great models and I had brought in some original portraits. A few artists then asked me to bring in more “figurative” works that I had created. So while perusing the boxes in my studio space where most of my paintings are stored, I decided to bring in this painting below… “Threads.” 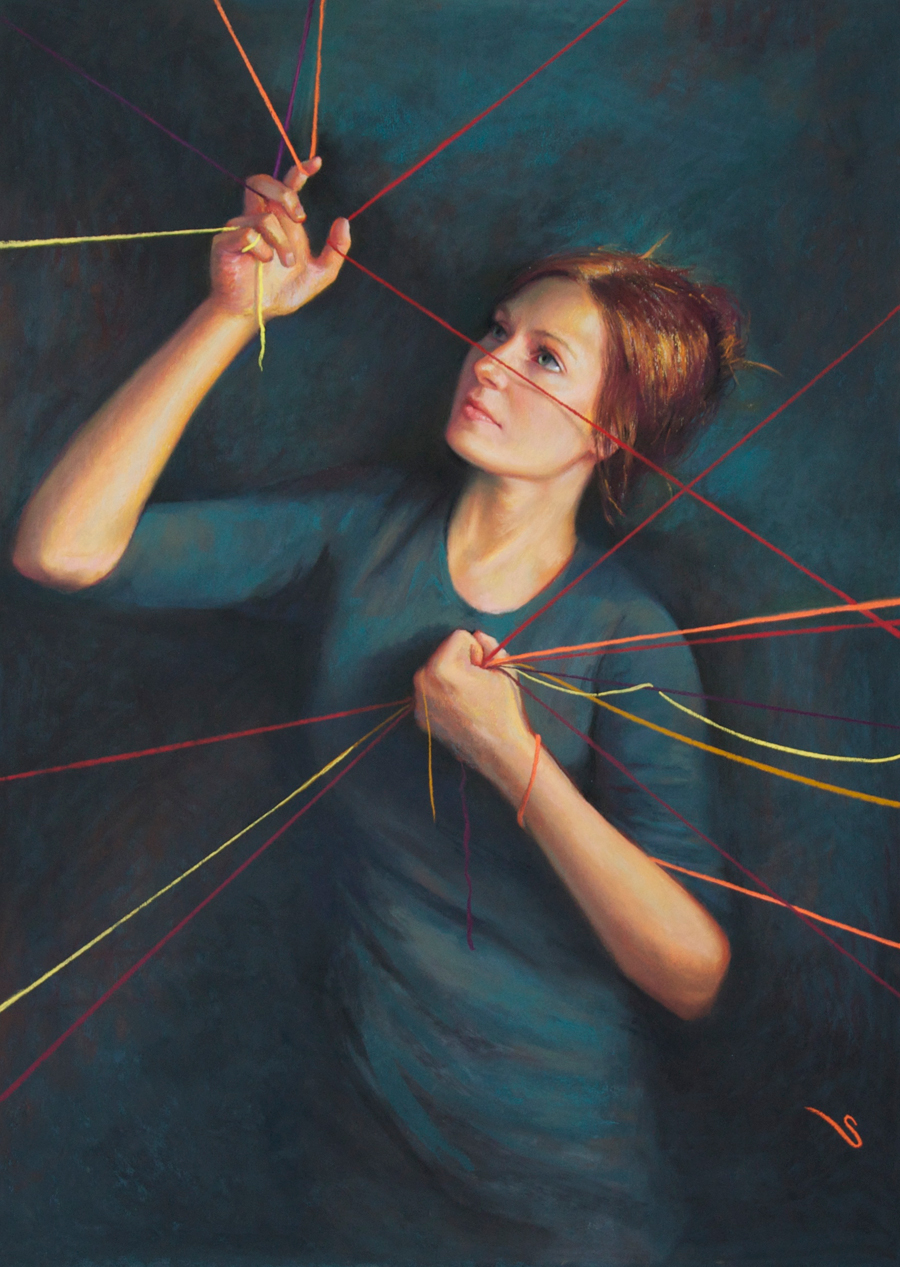 It won the Master Circle “Prix des Pastel” Award four years ago. (Kind of a big deal in the pastel world…) Then it traveled to China for the IAPS Second Biennial International Exhibition in China where it had traveled for 18 months as part of a special exhibition.

It was featured in many magazine articles and even in a French book. I was happy this painting was so well-received. We artists love our paintings getting attention! Last summer it came back from China and was sitting in the box that it had been shipped in. One thing led to another and I admit I didn’t open it.

Then I moved. I figured the best way to keep the painting protected was to keep it in the box. Right? After all, it was shipped from the prestigious Ming Gallery. The painting had been shipped to and from China unframed because they wanted all the artwork from around the world to be framed the same. So, in the interest of keeping the painting safe, I left it alone until last week when I took the box to the workshop and thought it would be a great idea to open the painting and share it with the artists there.

I unwrapped it during one of the model sessions. And this is what I saw. 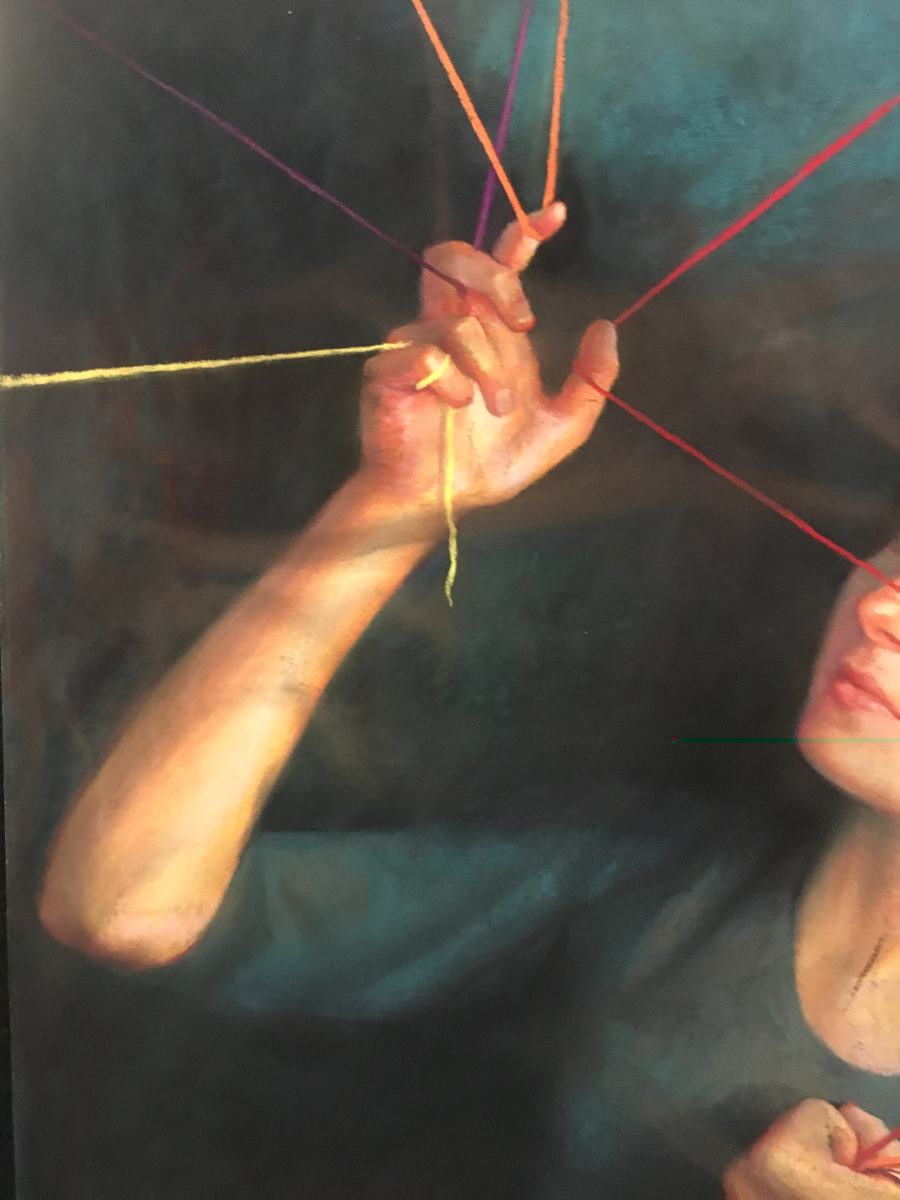 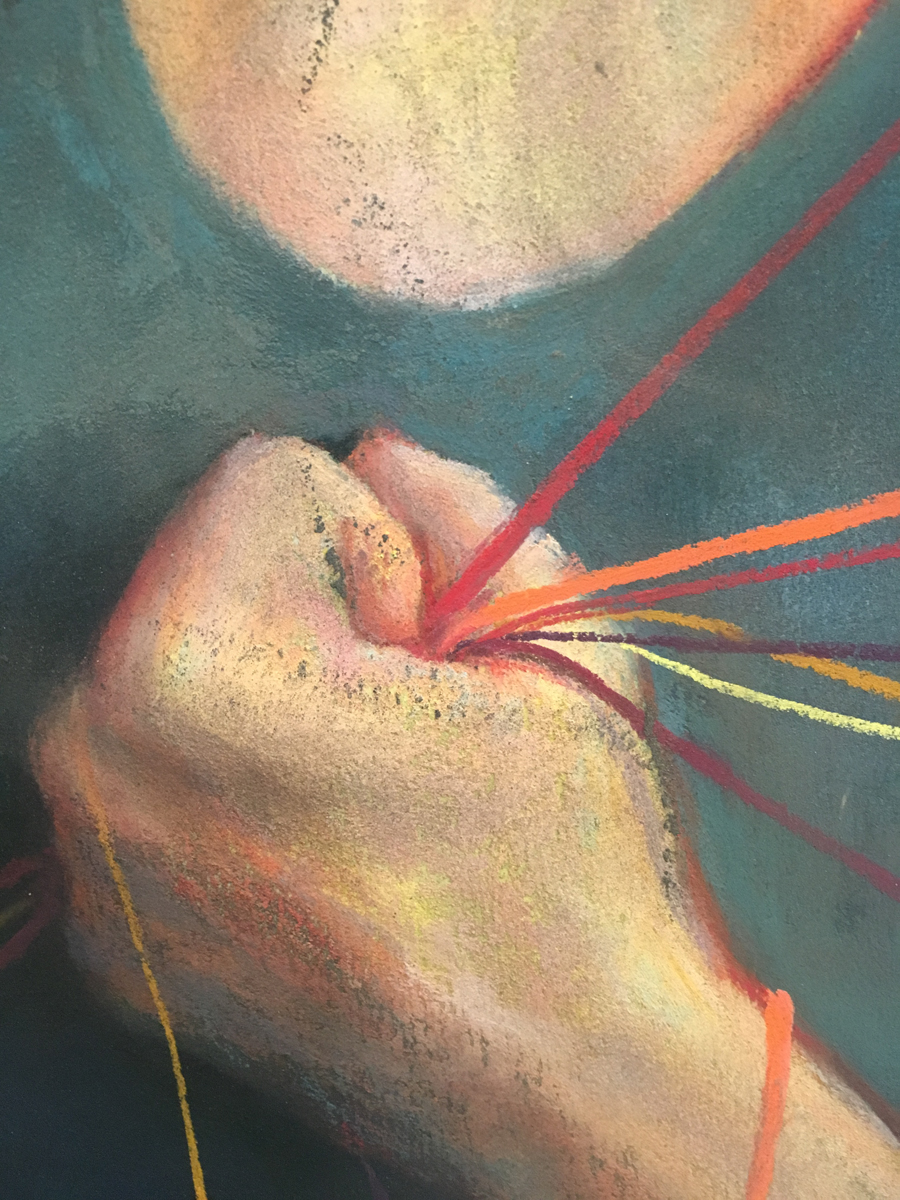 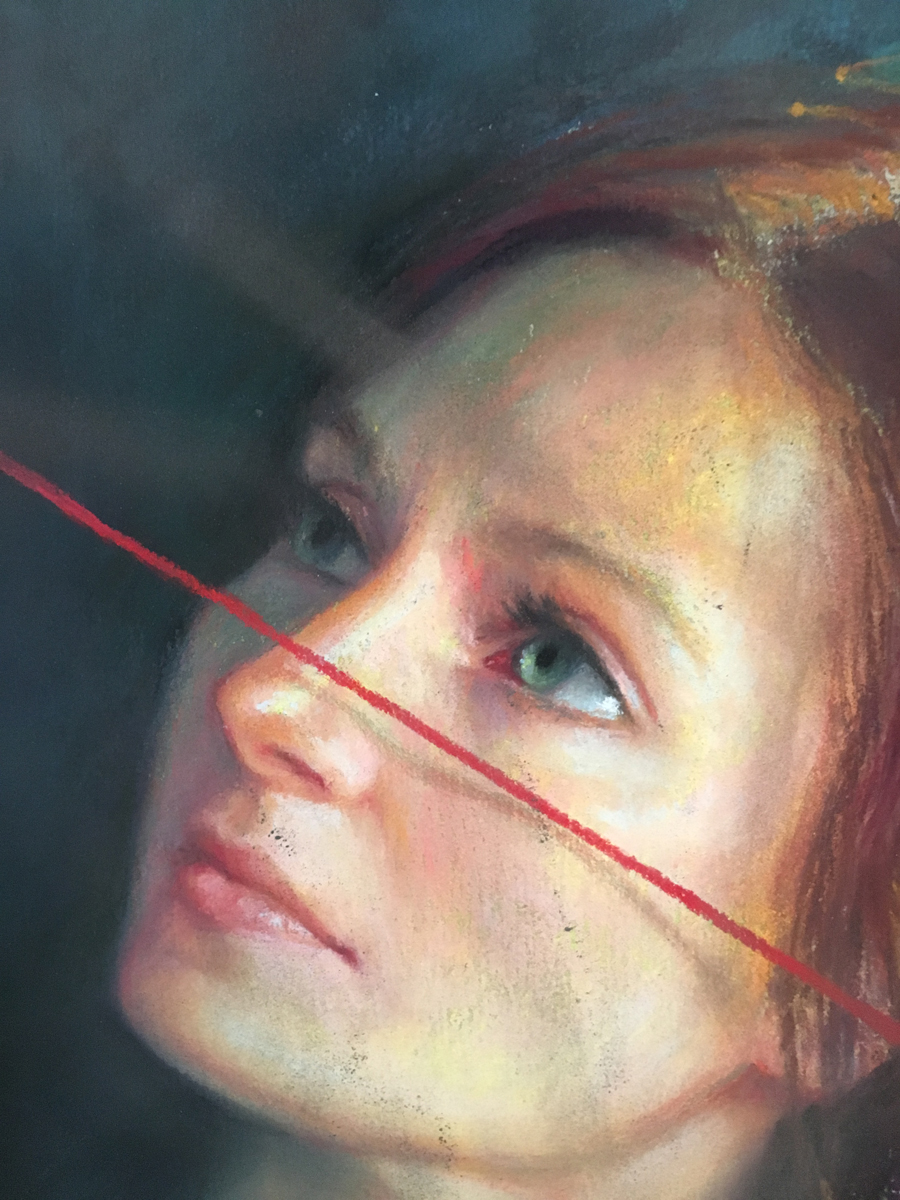 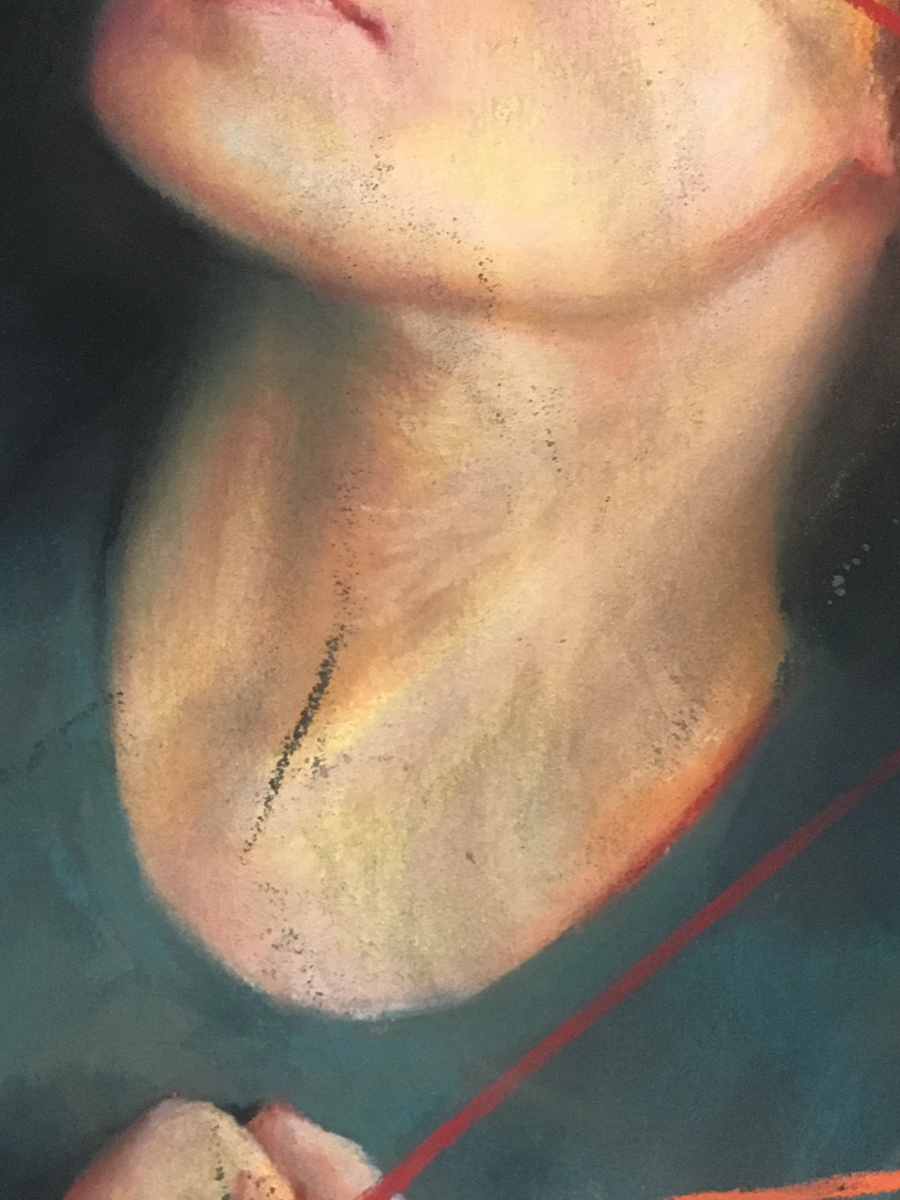 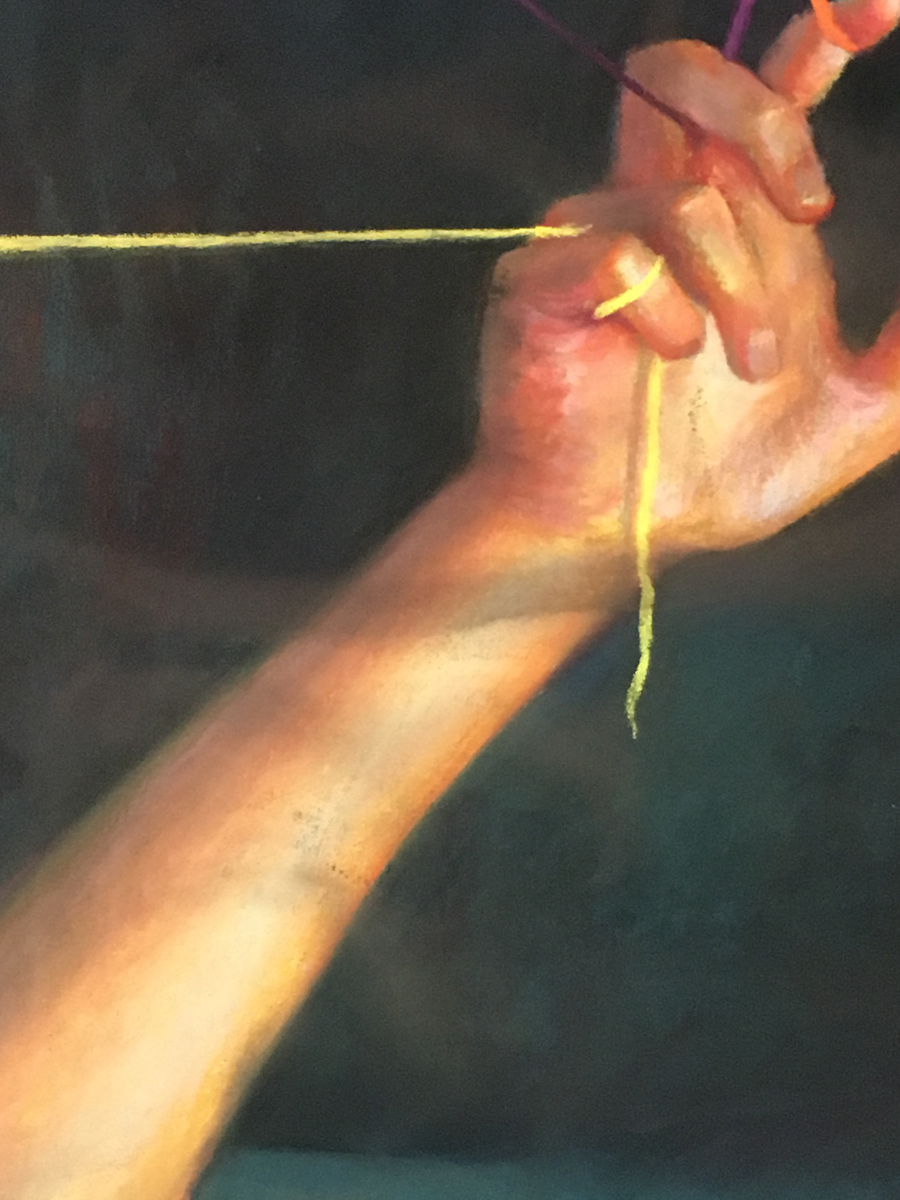 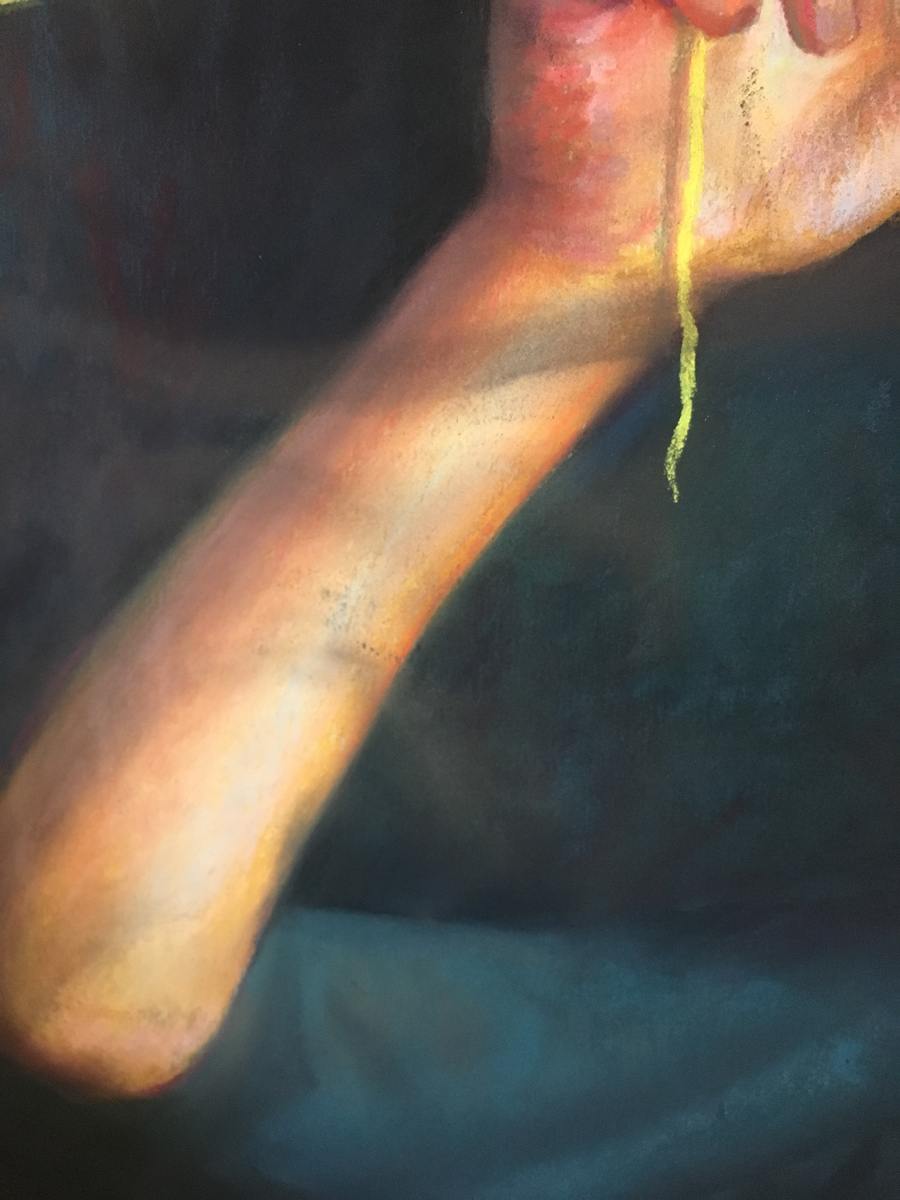 The painting has been destroyed. It was wrapped in rice paper- not glassine – and two boards were jammed against it. It was taped very hard to the boards with no spacer. I had shipped it out in a box with glassine covering it and a large spacer protecting the work. I expected it come back that way. Nope. The entire painting was now covered in a grey, foggy haze and there were many clear large smears across the figure. It is actually hard to see here in these photos, but it is very dramatic in person.

It looks like it was taken out of the frame and was smeared. But instead of letting me know, the handlers put wooden boards against it and then shipped it back. (oopsie!) Perhaps in an attempt to cover up the damage. I don’t know. But most of the damage was not from the way it was packaged. It was very unprofessional the way this was shipped. A pastel should never be handled this way. And I was unprofessional in not opening the box when I first got it back. And it is too late to complain now. I just trusted it was ok.

It has always been my problem. I always trust that things will be ok. That bad things won’t happen. I once was in a gallery space and the owner put my rather large pastel on paper on the floor while we were choosing potential frames. She had a dog that started running around the gallery. I was nervous, but didn’t complain since I was young and didn’t want to “cause a fuss”. (I have since gotten a backbone) and I really thought it would be ok – that she would control her dog- until it walked across the painting and put a few toenails through the piece.

Then, this past week I came home to find that my new 7-month-old kitten had knocked over a water glass which left a huge puddle under my computer. (Well, what do I expect? I did name him Havoc…) Yup, the computer is gone. I am happy to say the hard drive was saved, so this is not a super-sad story, but I do have a smoking credit card for a new computer. Sigh. And this is the reason why there was no blog last week.

So there I was in the workshop… a very damaged painting on my hands and 16 artists looking worriedly on… so what do I do? I had nothing to lose now… so in an effort to teach (and to contain my sorrow) I painted directly on my once, award-winning painting, making marks on it to show examples of what I was demoing in the workshop regarding the handling of the medium. Redrawing parts of the threads and talking about which brands worked best for what area. Painting right on the face to show how the color can be brought back and even repainting the eye- showing how the “power hierarchy” can be re-established. When I was done? Yep. I smashed it back against the boards and it is again sitting in a box. I may fix it someday. I may not. My trust was broken and I will sit with it for a while until I can find a resolution.

Life is hard. And things get damaged. Relationships, paintings and computers.