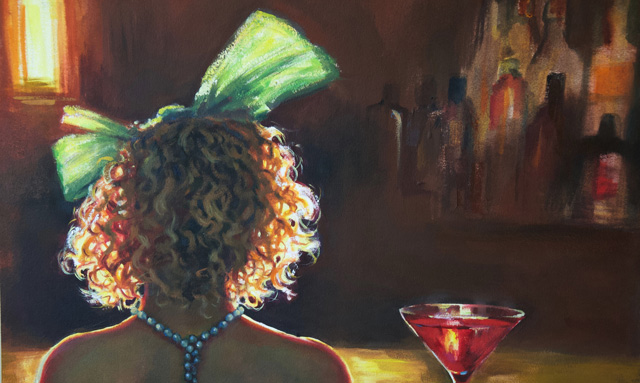 I recently found myself painting in oils for a new Restaurant…

The restaurant is called the Sewickley Tavern in the town of Sewickley that I live in near Pittsburgh, PA and I am so happy to have been part of this project. It is a rare and wonderful thing that a restaurant devoted a huge budget to original art. I got to work with the framer, the owners and the architect and I also recommended a few other local Pittsburgh artists to be included as well and they also created custom pieces for the walls and menus. More about them later!

It all weirdly started this past August when I took a bunch of photos of my daughter and her friends before they all went off to college. It was just a fun, dress-up photo shoot and I just wanted to have a bunch of new photos references for potential paintings. They dressed up with feathers, pearls and in silks from my model dress-up chest and we had a fun time just goofing around and taking photos. 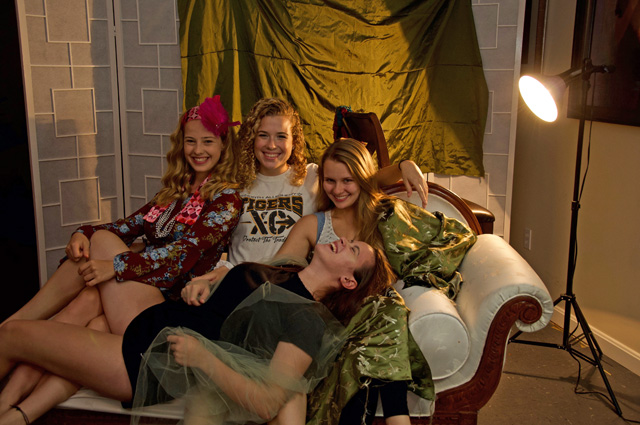 Literally later that week I was contacted to potentially be involved with doing paintings for the restaurant and they wanted models in the style of the roaring twenties but with a contemporary twist. Serendipity! I literally had just taken photos like that!

But there was a fast deadline to participate. I had to do color studies within 24 hours to present to the owners and the architect along with some of my other work. No problem. I love a good deadline.

Originally I had the middle panel including a bartender, but that idea changed out for another model in fancy twenties garb. Nothing was quite right in my photo references, but I knew the perfect model. Laura! So we met soon afterward and new shots were taken for her panel that woud be in the middle. I liked that the girls on the ends were younger and that the standing model in the middle is older. (we older ladies like to get dressed up too…) Time passed while the restaurant was being stripped and rebuilt and until I had final approval to start the paintings.

The first challenge was getting the sizes of the paintings correct. The wall there my panels were to be installed in the front of the restaurant were still being built– until the first week of December! My deadline to finish the paintings completely was Dec 18th so that the framer (the amazing Mark Rengers from the Sewickley Gallery and Frame Shop) could frame them over the holidays so they could be installed in time for the restaurant opening, which at the time was a date that kept moving.

The framed panels were to fit inside walnut trim on the walls going around the paintings. There was no room for error – even a half inch could affect the sizing of the panels or the frames and since the wall was still being built, I couldn’t order the panels until the wall was finished just in case the sizes got adjusted. So as soon as I had approval on the sizes (a weird 22″ x 42″ each) I had to order the panels custom- cut from Raymar and had them shipped as fast as possible so I could start painting. Meanwhile, I ordered a bunch of paint, lavender spike oil and got my drafting table ready for such a large triptych.

In my normal risk-taking fashion I decided to use a brand-new surface from Raymar. It is also being called “Arches Oil Paper.” It is a collaboration between the oil linen company Raymar and the paper company, Arches. The surface feels a lot like actual Arches watercolor paper and is treated for oils so there is no need to gesso it. It is mounted onto a very hard board. The plan was to paint to the very edges of the panels so they would be “float-framed” with a black space or “gully”around the panels before the frames started. It is actually a very cool way to frame paintings.

I had studied a few tutorials from some artists that consistently use this surface and decided it would work for what I wanted to do with the images since I decided the most important thing was to have the models very dramatically backlit. I planned to paint the images like I would in watercolor to get the lit areas on them to glow. So I needed a white surface. I used very thin washes of oil mixed with alkyd to get the washes to act transparently. It actually worked very well with the effect of the light bouncing through the paint and resonating on the white surface. Anything that was not lit I blocked out in grey and burnt sienna opaque washes. I specifically used Charvin oil paints which are ground extremely fine so that the thin washes acted more like watercolor washes. It was fun and thrilling to be working like this again. Last year I was teaching classes on “glazing” in oils and now I got to put this technique to use for these pieces.

Here are a few snippets of the paintings. The light glows in the paintings, making them look very luminous. That is the effect from the glazing. I built the images very slowly with thin washes (even though I was in a hurry- I only had barely 3 weeks to finish the paintings at this point!) The restaurant has very fun, orb-like fixtures hanging from the ceiling so I wanted the models to be very lit from them and the sconces on the the walls. Rim-Lighting on the figures was fun to build. Everything else in the images became secondary. 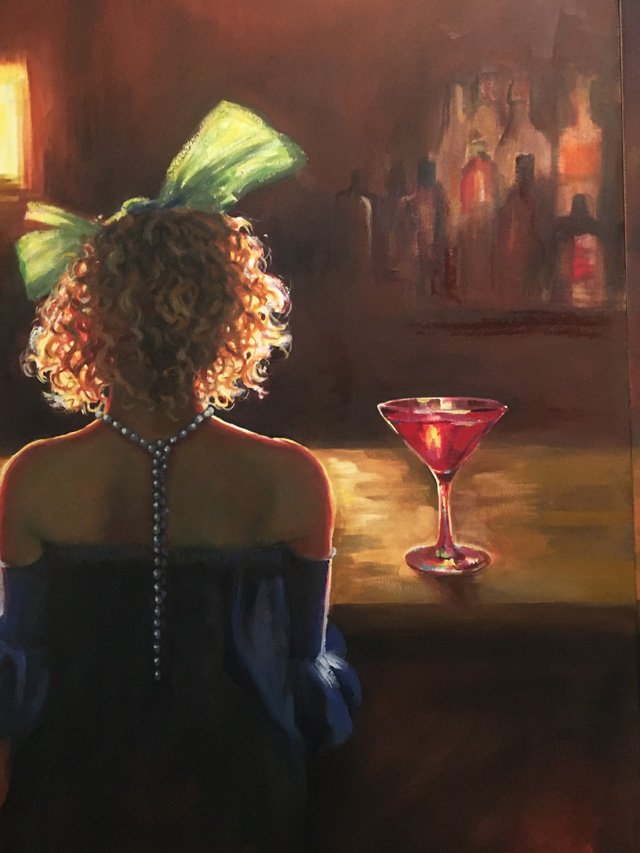 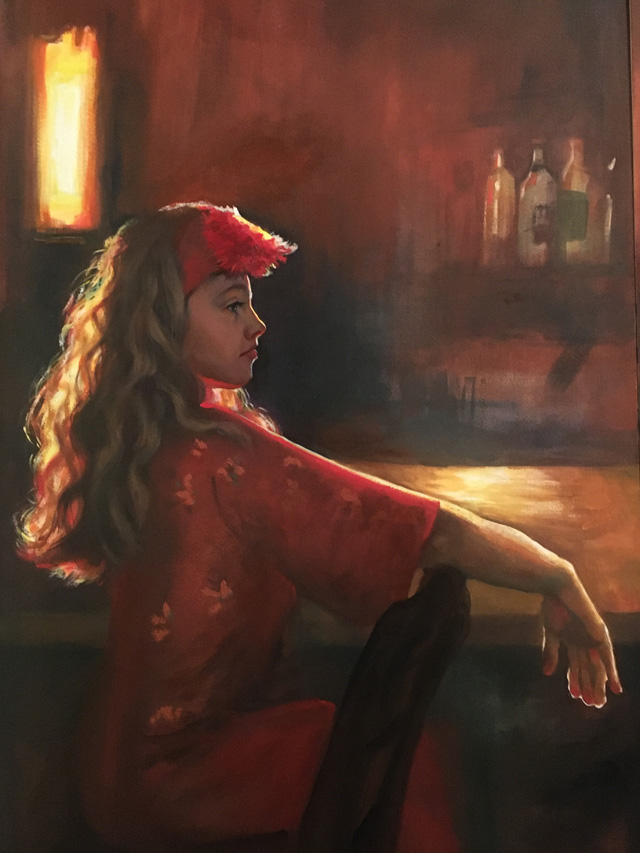 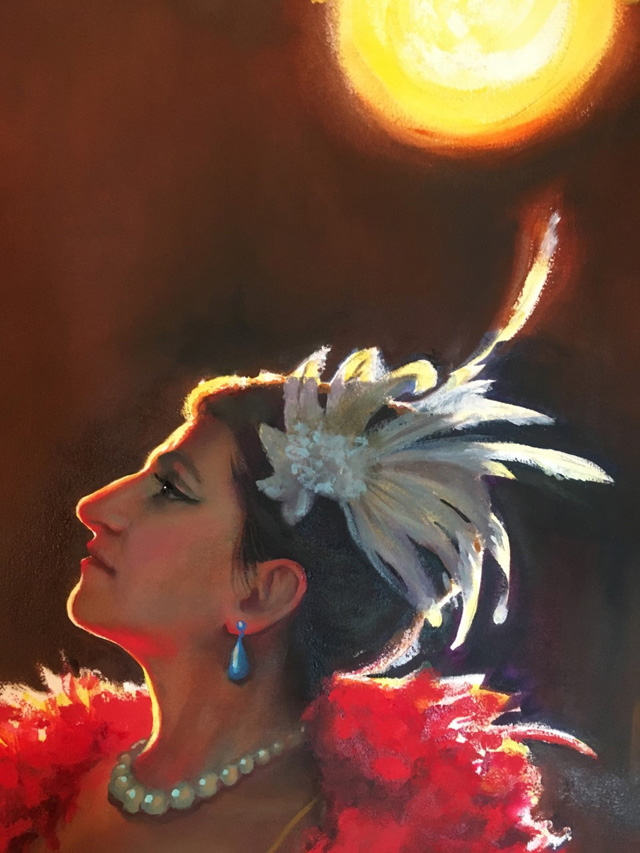 … and now I will leave ya hanging a bit until next week for the completed images. There is so much to talk about with these images- how they were glazed, etc, so I will fill ya in on all that next week.