There was a story going around for years of a woman who was dining at a department store restaurant and at the end of eating one of the store’s “famous recipe” cookies, she asked for the recipe…..

She got a copy of the recipe, but when she got her bill she saw that she was then charged $250 for the recipe and was then requied to pay it. She reportedly paid the bill, but then decided to get “even with the man” by distribuiting the cookie recipe as far and wide as possible to get her money’s worth.

I always liked that story. I thought is was cool for the “little guy” to get back at the big company that took advantage. I have since read that this story is an urban myth for precisely that reason- it is a nice, feel-good to think we have a way to fight back against injustice.

When dealing with clients now I always use a contract. Many years ago (boy, I am starting to sound old) I just made verbal agreements, which I think most artists do. But as I went along I realized that as I was doing more portrait commissions, the more I really needed some kind of legal contract to keep everything up front and keep things…well….professional. So I contacted a family friend that I knew who was a lawyer about getting a simple document to spell things out with clients. A contract makes the client realize that this is work for hire. This is not a favor, or “fun time” for the artist, but work. A contract spells this out. If you do commissions of any kind, I recommend using a contract. At least a written invoice that states what they are getting and what you are getting in return. Especially when it comes to framing. I never include framing in my commissions. The fee is for the work only. Framing is another whole issue.

So my lawyer friend contacted another lawyer who specialized in contracts for freelance artists. She said that this second lawyer had a basic form that I could use for freelance work. She said it would not be that expensive since it was already written and I could adjust it as I saw fit for my use. She then suggested we have a 3-way call so I could briefly talk to the second lawyer. (warning bells going off yet? )

So I had a nice little 3-way call with the 2 lawyers and I thanked the second laywer for getting me this form. He said he would mail it to me and to have a nice day. The call lasted maybe 15 minutes. I received the form it the mail and it was longer than I needed. Four pages and it included things like charging for any revisions, and strict deadline material. So, I revised it and adapted it for how I work (for example, I never see the point in charging for revisions. I want the client to love the end result, and paintings will require revisions at the end sometimes. That is just part of the job. ) So anyway, not long after I got the paperwork, I received a bill in the mail and I almost fell over. The nice 15 minture phone call cost $1500.00. The cost for the contract, which remember, was already written and all he had to do was make me a copy, was $6000.

Yep. I felt violated. And stupid. Not asking questions along the way can get you into big trouble. This was before the internet (yep, old) and I wasn’t able to get get a bland copy of something off a site. I knew I would have to pay for a contract, which is fine, but this cost was ridiculous. Big learning lesson about expectations, trust, and spelling things out. So for anyone that would like a copy of my contract, please email me and I will happily give you the revised, simple contract that I use. Consider it paid for…

Now it is time for the “icky” part of commissions. Money. In the very beginning I charged $200 for a portrait. This was back at the same time that I was doing graphic illustration and I thought nothing was ever going to be worth less for my time than that. I was new to it and I was still learning after all, so that was fair. Over the years my fees have gone up considerably. I remember the first time I told someone $1000. I broke out into a cold sweat. They didn’t seem to even notice and I have gotten more work since my priecs went up. My fees right now are based on three criteria only: A Head and shoulders; A 3/4 portrait (including hands and any kind of background ) or a full-body portrait. That’s it. I don’t charge by sizes like a lot of artists because I could spend 100 hours on a 16 x 20 ” or just 20 hours on a 40” x 30”. It depends on what is all included in the image. More along the lines of how limners (portrait artists called themselves that back in the 1700s) would charge “an arm and a leg” for appendages in a portrait. Yes, this is where that phrase comes from, so if you notice portraits at about the time of the Revolutionary war, many arms and feet are blocked by tables or hidden so they didn’t have to be paid for.

I also charge individually for each person in the portrait if there are multiple models. After all, more heads equal more time. So the first person in a painting is the fee below and the second or third person is half that price. I figure as long as I am doing research and designing/painting one person, I just have to add in the extra time for the other people.

(A DaVinci painting just sold at auction for 450 million, so don’t I look reasonable?)

My client wanted 3 separate head and shoulder works of each of her children. She was familiar enough with my work to know that she wanted paintings that were similar in feel to this one below that she had seen… 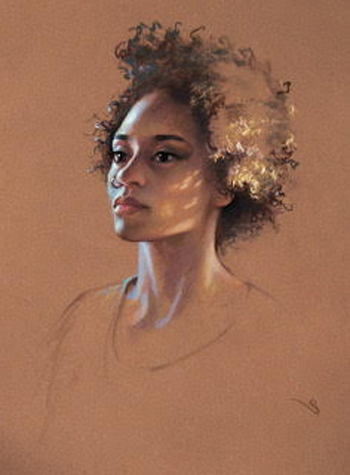 So although there will be 3 separate paintings, the overall cost is $8000 plus sales tax. ( yes, this considered is a sale just as if it was sold in a store or gallery ). $4000 for the first head plus 1/2 fee each for the additional 2 children. (If you are not charging sales tax for your commissions, be careful! You may be liable if audited. )

This brings up an important point to consider for clients. Putting all three children into a work is very nice, but then what happens 20 years from now? Who gets the painting? I have heard horror stories from other artists that say works have caused family feuds and they recommend works be put into a will. Separate paintings let each child own their own portrait in the future. Just something to think about with a client.

In the portrait world, I am considered a good deal. I have clients in Washington DC that even think I am cheap. There are portrait artists that charge upwards of $20,000-$30,000 for a corporate portrait. Some famous names charge more than 3x’s that. Maybe some day. I remember telling my mom when she was watching my kids when they were very small (so I could get few hours in to paint) that someday I would be good enough to charge $5000 for a work. That price seemed so far away and scary at the time. It is all in what you are used to. I am comfortable with where my prices are now and someday they will go up again. (so if you feel you are charging too little for your work, you are…..) 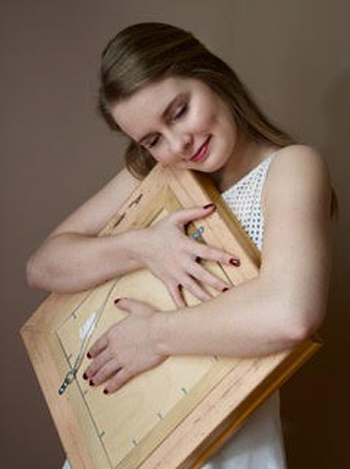 The painting is $1000. You may think this is a pretty good deal for the artist. So let’s break it down. Typically half the fee goes to the gallery. They have to suvive too, so I don’t begrudge them that. Now the artist has $500.

Out of that $500 the artist pays for the framing. Let’s say it cost the artist $150 for the glass and frame. (It is near impossible to get something framed this cheap, btw) So now the artist has $350. Then sales tax must be paid- 7% here in PA (although if it was sold through a gallery, the gallery will collect that at the time of sale). Then the artist has to pay for his materials to create the work. Pastels and paper? Then income tax has to be paid, which is about 30% of what is left. If the aritst is lucky, he will wind up with $150-$200 out of the $1000. If the painting took over 15 hours to complete, we are taking about working for under minimum wage.

Yep, that is why we are starving. But happy too. I have yet to meet an artist that says they hate what they are doing. Many have had to fight to be one! Go you!

Another thing I suggest to include in your contract is a “Services Rendered” fee. Like I mentioned, I receive half down for a portrait when I start working with the model. If for some reason, the client was not happy with the finished portrait and they do not want it even after revisions are made, then the painting is forfeit and I get to keep it and the first half payment which is kept for “services rendered”. In other words, they lose the first payment which is fair since a lot of time was put into the work to try to make them happy. Luckily, (knock on wood) I have never had this happen, because I think just listing this up front lets them know that I will do anything to make sure that they love the painting, and am happy to do revisions, however, if they are unreasonable in their demands, then they will lose the down payment.

So Client X understood my prices and my contract. We talked about expectations and what she envisioned and we set up a meeting.

Next week….. working with the kids.

If you are in the States, have a wonderful Thanksgiving!