When I was in 7th grade I had a crush on a boy on my bus. We were in the same grade and he always sat just ahead of me and had the most amazing blue eyes…..

I don’t remember ever having a real conversation with him all through middle school or high school- he made me too nervous- but many years later I ran into him with friends I knew. I must have been about 21. I could tell he didn’t recognize me, but after we got to talking, he said he vaguely remembered me but he was interested now! He asked me out. But I had moved on, as people do. I was in a different place and more confident. I couldn’t even see why I had been so nervous when I was so young. I turned him down, but had a good chuckle on how funny life is….

In the year 2000 I attended the Portrait Society of America Convention for the second time. My daughter was two years old, and I was 7 months pregnant with my younger daughter. I escaped from home and had gone anyway. Swollen feet and all. The society was pretty new then, but they had big names…Everett Raymond Kinstler, William Draper, etc…… painters I admired and loved. I literally waddled around gawking at all the artwork. Freaking out internally when I recognized someone like Daniel Greene.

At one point an artist was sitting next to me. Turned out it was David Leffel……I remember literally quaking inside. I was so nervous. 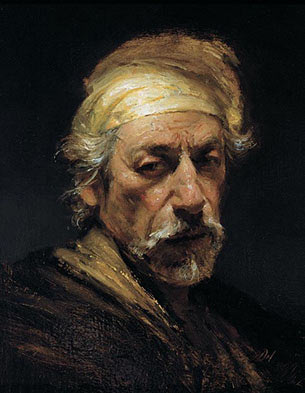 He kindly talked to me although I don’t remember the conversation now. I remember just being scared to death to answer him. Why, I can’t put into words. He was an artist. A good one, and I was an aspiring artist. A struggling one. Why couldn’t we have a conversation? Nerves are a crazy thing.…but I remember thinking that one day I would get a grip on this art thing and that I would be good too.

On the last day of the conference I got up enough courage to ask Burton Silverman (my idol at the time since he had been an illustrator like me) to review my little photo “brag book” of paintings. I had seen others do it and thought it might be a good idea. I almost wept when I talked to him – I was clearly star-struck. I couldn’t take classes or workshops, (especially in my condition!) but maybe he had a seed of wisdom which I could take and grow. He flipped through the book and at the end he said I should take some art lessons, apologized that he had to run to catch a plane, and then he was gone.

I don’t know which hurt worse- feeling like I wasn’t worthy of a few moments of serious contemplation or if he had hit the nail on the head because both he and I knew that I was missing so much knowledge.

This past month I was at a different convention in New Mexico for the IAPS (International Association of Pastel Societies) which is held every 2 years. (Got a new notepad and a pencil at the lavender farm this time!!!!) 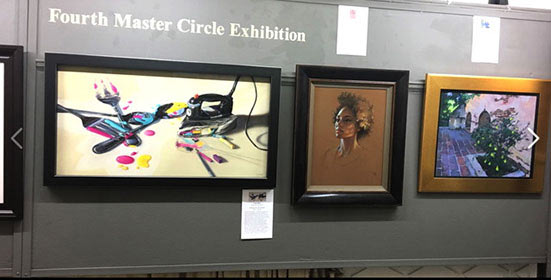 I am part of the Masters Circle now and again I am still a bit nervous trying to meet (and maybe get approval?) from other artists. I was getting in my seat for my connecting flight from Dallas to Albuquerque, when I had a very surreal moment. Some artists recognized my Heilman travel pastel box and asked if I was going to the convention and asked my name. One woman started yelling “Swann? Ahhhh! I love you! I love your work!” Needless to say the other passengers on the plane were looking for a celebrity….

But the moment was golden- (thank you Eve)

I met so many artists. I had lunch with big names in the pastel world and marveled at the very accomplished Chinese painters. Sally Strand asked me how I was doing. (wow) Albert Handel – the Juror of the Masters Exhibiton- asked me which painting was mine, dragged me over to it, and then got quiet and said it almost won an award. No criticism. (whew!) John Philbin Dolan (the new Prix des Pastel winner) bought me a glass of wine. (Love you John!) There were hugs from Cuong Nguyen. Twice! 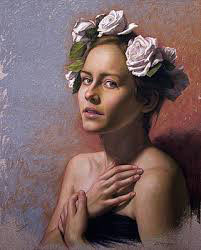 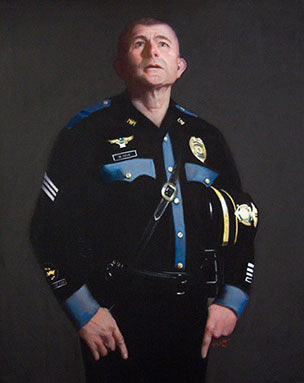 And there were cheers from the front row during my crazy dueling demo night from a few artists that I have mentored over the years or that have taken a workshop- (thanks Jan, Anne, Olya, Linda and especially Lisa Rico for timing the model!) I did my very first demo on stage of a flamenco dancer in front of attendees on Fiesta Night- try painting a portrait in 90 minutes in front of a few hundred people while a very loud mariachi band plays nearby! (Thanks for walking through the fire with me Bev Lee! You are an amazing artist and person. We are comrades of war now). 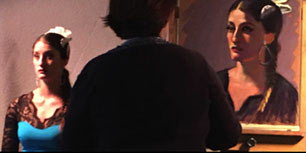 And then I met lovely artists who got so nervous when they realized who I was. (Love you Anne!…) This was very freaky for me and felt like the other side of time like with that little boy on the bus. I was finally being noticed because I was in a different place in life… and it felt fine.

The hotel is missing a few flowers out front though. I had to find something to paint for my first demo at the Edgmon booth. I have their workstation and it is awesome. (Love you Susan Edgmon!) Yes, I attempt florals every once in a while…. Then I painted a portrait in about an hour of Marlene who sat for me when she wasn’t working so hard at the booth. Creatacolors- so good- who knew? Did this with only 6 of their sticks…. 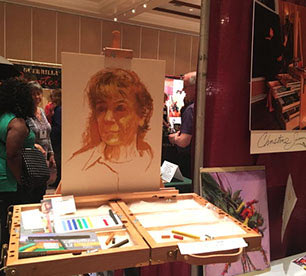 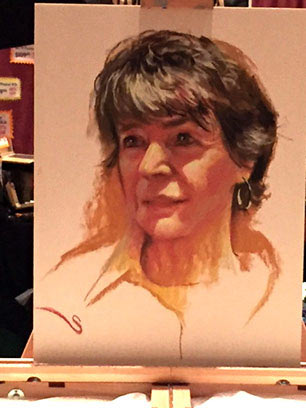 This has led to some new workshops and opportunities.

Those words from Burton Silverman have stuck in my craw for years- What don’t I know? What am I missing? What flaws do others see in my work that I don’t? I have become more knowledgeable in my own “art skin” over the years, but I don’t think that feeling ever goes away- the most accomplished artists I met this weekend still seemed in awe of each other. Of the varied gifts others possess perhaps a bit easier than they do. That was the best part of the convention. The love and respect that was everywhere.

Do I still need art lessons? You betcha. But I have picked up quite a few things along the way. ( Hear that Burton? ) There is still so much to learn. So in the end he was right. And there is so little time.

We grow. We learn. And we can get to the other side. And some day we can be noticed.